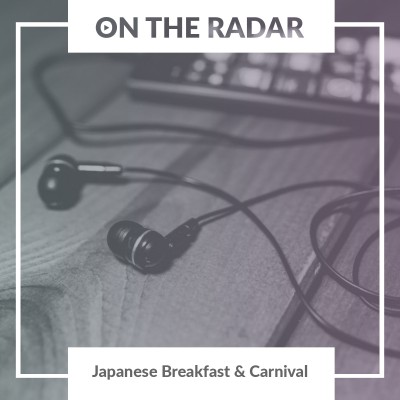 Japanese Breakfast is the moniker of Michelle Zuaner. Having previously been the singer and guitarist of emo tinged rock band Little Big League, Zuaner began Japanese Breakfast in 2013 to pursue a lo fi pop sound which she feels closer to her own personal musical roots.

Tragically, Zuaner would lose her mother to cancer only a year after she first started her new solo project. Having already left Little Big League to be close to her family, providing comfort and care, she began to concentrate on Japanese Breakfast as her primary creative focus with the music becoming somewhat of a means to come to terms with grief understanding her new place in the world. This resulted in the record ‘Psychopomp’, completely written in a handful of weeks.

Expanding on her initial experimental sessions which saw her make daily lo fi recordings for a month, ‘Psychopomp’ would explore the many facets of heartbreak, touching upon the pain of unrequited love or the forlorn memories of former relationships. Far from a dirge, the album electrified listeners and was lavished with widespread critical acclaim for its lush pop/rock feel and the accomplished song writing exhibited on every track.

Whereas many suffer from expanding all their imaginative energies on their debut record leaving them sapped, fresh off the heels of her first full length is second album ‘Soft Sounds From Another Planet’ which was released a mere fifteen months later.

"I'd been taking care of my mother while she was dying, and that informed the first record. This one provided time and distance, as it had been a year and a half since her death, but it's still there for sure. I used science fiction converged with those feelings this time. It was cathartic for me."

Moving from the internal world to the far reaches of outer space, ‘Soft Sounds From Another Planet’ continues Zuaner exploration of her place in the universe first started on ‘Psychopomp’, using science fiction as a tool of expression without ever spilling over into a full on concept album. Some of the songs on ‘Soft Sounds From Another Planet’ stem from finally completing demos first started during her Little Big League days, which enabled her to create a well thought out and developed album, albeit in a remarkably short space of time.

Having recently completed a European tour which saw her being supported by the likes of Phoebe Bridgers, Girl Ray and the resplendent emerging dream pop band Night Flowers, Zuaner has now announced her intention to return to the UK next year to play a special headline show at Islington Assembly Hall in London on Tuesday 15th of May.

Given the sheer amount and the quality of her recorded work plus her relentless dedication to live performances which are all full of heart, Zuaner truly can be described as the oft too used word; prolific.

If you like it loud, hard and heavy then you are going to love Carnival Club. Their band members include drummer John Azopardi, guitarists Eddie Moxon and Kai Jon Robert who takes on lead vocals with George Peel playing bass.

Though based in the fertile musical territory of Manchester, the lads are a million miles away from the baggy indulgent excesses of the 80’s/90’s Madchester scene and the accompanying acid house culture. Nor do they have much in common with the early post punk proliferated to the world by Tony Wilson’s cohorts at Factory.

Rather, Carnival Club take their ques from the heavier fringes of blues rock. Drawling over punchy riffs and hard-hitting drums, their brattish performance is backed by unlimited confidence and incendiary guitaring prowess.

The significant schism between schism between the sound of CC and the genres we tend to associate the Lancashire metropolis may be down to the fact that only Robert is actually from Manchester, with Lodge hailing from Stockton-on-Tees, Peel from Clitheroe and Moxon coming from Yorkshire seaside town Withernsea found on the opposite coast.

With the new year fast approaching, Carnival Club have announced an extensive tour to keep us sated whilst we await further studio recorded releases.