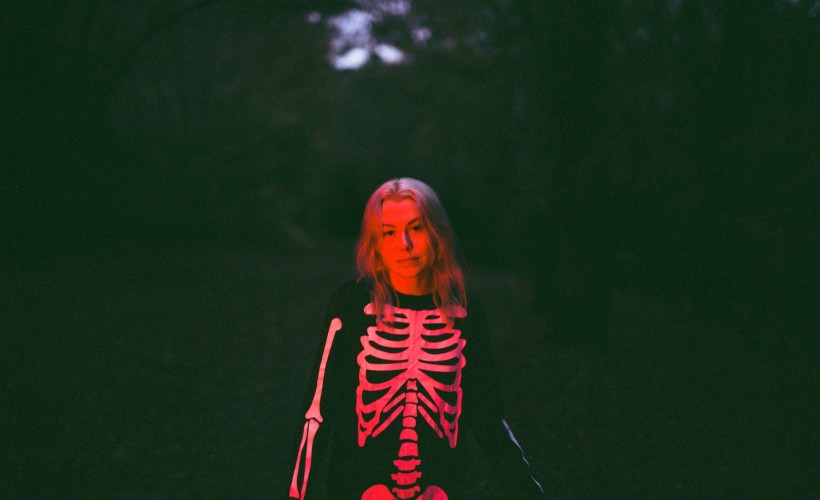 Phoebe Bridgers has announced more live shows as part of her Reunion Tour, which include her first
UK/European dates since the release of Punisher and a recently-announced appearance at this year’s
Glastonbury Festival.

The acclaimed singer/songwriter had a busy 2021, with 4 GRAMMY nominations, multiple late night TV
performances - including a smashing debut on Saturday Night Live - a sold out US Fall tour, multiple
festival appearances, two songs for charity (“That Funny Feeling” and “Day After Tomorrow”) and
collaborations with Taylor Swift, The Killers, Paul McCartney, Metallica and more. Most recently, she
received Billboard’s 2022 Women in Music Trailblazer Award and revealed plans for her own monthly
radio show, Saddest Factory Radio, on Sirius XMU. Now, she’s getting ready to go back on the road,
this time, taking her critically acclaimed Punisher album to audiences across the United States and
Canada, as well as to the UK and Europe for the very first time.
The UK/European run of the Reunion Tour includes a number of dates in June and July, with stops at
London’s Brixton Academy and an appearance at this year’s much-anticipated return of Glastonbury
Festival. $1 of every headline show ticket sold will be donated to The Mariposa Fund, fiscally sponsored
by The West Fund, which helps pay for undocumented people trying to obtain reproductive health
services, including abortion.

The house is exactly what you’d expect: practically a studio apartment except it stands on its own, draped in honeysuckle and Dutchman’s pipe; a yard of dune sedge and stone. Her dog is buried in the garden along the eastern wall; sometimes, she wonders if the ground will bloom half-a-dozen of him under a certain kind of moon. In the morning the light creeps sideways through the windows and lights her up from the chest down, her head nestled in the shadow. Sometimes she finds herself playing guitar before she has left sleep. Her hands strum but her mind is still dreaming. (It’s her birthday, she’s at the movies, the screen is a tidal wave, someone touches her leg, she wakes up with her fingers tangled in the strings and the kettle whistling.)

The house is haunted. It should go without saying, but it should be said anyway. The house is haunted, but no one knows anything about the ghost or how it messes with you, except for the fact that every time she goes away (to Texas, to Memphis, to Graceland, to Germany) she always ends up coming home again. It’s the strangest kind of haunting. Everyone calls it, the house, the House of Punishment - more than one mistaken citizen has turned up looking for a similarly-named erotic dungeon on the other side of town - but the name is misleading. It is not a house where someone was punished, or a house where someone might be punished, but a house that replaces punishment; instead of feeling guilt or regret you must play quietly in any corner, and eventually the emotion will resolve itself.

Inside, every door frame is notched: the respective growths of former tenants, friends. On one of them, a place where - deep in her cups - she’d measured her height as a full five inches taller than normal; only the next morning did she realize, cotton-mouthed, that she’d been standing on her toes when she’d slid the pencil over the apex of her skull. There had been a Murphy bed once, she was certain, and sometimes when she was very, very tired she would imagine her bed, which was not a Murphy bed, snapping her up into the wall. Next to her bed, in her nightstand drawer, lived the following things: crumpled receipts, red yarn, eight dollars, a white lighter, two undeveloped film cameras, Grether’s Pastilles in their old-timey tin, fistfuls of birthday cards with the shimmer worn off, a pocket-sized copy of the constitution, a pocket knife, a pair of swimming goggles, a pair of recording headphones, shoelaces twisted into a Gordian knot, an unpaid parking ticket, a strip of Peanuts Halloween stickers, an MRI request form from when she sprained her finger, colloidal silver (someone told her it would cure her cold; someone else told her it would give her Argyria), a map of Kyoto (she’d gotten bored at the temple), incense, her first fan letter (she promised herself she’d respond; she never did), a bunch of bolts, a plastic doll’s hand, doggie bags (he’d died over a year ago), an unopened Replacements cassette, an unopened 23 & Me kit, an unopened fortune cookie, unopened pepper spray she doesn’t trust herself to take out of the packaging. In a fake book on her desk - pleather-bound and conspicuously absent a title - she collects her used boarding passes, old concert tickets, disconnected wristbands. It doesn’t escape her notice that she can’t throw anything away, that objects remain unopened, unresolved, untangled, unconsumed. She is always in the middle. She is never at the end of anything.

She lives near a hospital. All night, she hears sirens, imagines the people being transported to and fro, their bodies speeding along in the back of ambulances and their spirit trying to catch up. She makes jokes. “If I wake up, someone better be dying,” she says, until one night she wakes up and feels it: someone’s essence slipping past her on the way to somewhere else. After that, she thinks about the hospital as a metaphor, and considers the many ailments the metaphorical hospital could cure, the many symptoms it could treat: Imposter syndrome. Cabin fever. Foot-in-mouth disease. Word vomit.

She invites her friends - that is to say, her family - over for dinner. She has this one friend whose dad was really obsessed with blood-blood as in family, not the interesting kind of blood-and how it was thicker than water (ew), and then one day her friend looked up the actual expression and it was, The blood of the covenant is thicker than the water of the womb. Shit, right? Anyway, she makes a green bean casserole, which is demolished in short order, and hot rolls. Someone kills a pint of ice cream she’s been saving. Someone else drinks a beer so hard it sputters, erupts. Someone else sits in the corner playing cat’s cradle, waiting to feel the guilt lift from their sternum.

After that, the coven of her covenant goes out beneath the new moon; they journal and play Bright Eyes and Britney Spears and act out María Irene Fornés’ plays and eat peaches. They lie on the grass and the stone and talk about the skies they were born under. They don’t believe, really, that it makes a difference, but it’s nice to think about. After all, everyone knows the world is ending. They’ve been told as much, and they can see it in the streets, and they know the world is irreparably fucked, but most importantly they feel it among themselves; they know this goodness cannot last forever.

She sits near them. They are together but at the same time they are alone, as we all are. Someone has put a braid into her hair; she’s left toothmarks on someone else. Something moves through the empty house, less the ghost than the breath of the ghost. She tells her friends: “I’m not afraid to disappear.” Someone laughs. Then, someone else opens their mouth, and something else climbs out

Looking for Phoebe Bridgers tickets? You can book yours with Gigantic!

That's all we have for Phoebe Bridgers! Check out their upcoming shows