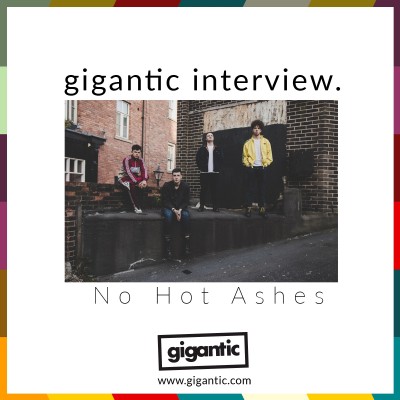 No Hot Ashes are the bright sparks from Stockport, taking on the world with their politically charged funk. Comprised of drummer Matthew Buckley, guitarists Luigi Di Vuono and Isaac Taylor who takes on lead vocals with Jack Walsh playing bass; these firebrands combine infectious guitar riffs and a raw singing style which you can hear on their debut EP ‘Skint Kids Disco’ which features their killer single of the same name.

The boys have earnt a reputation for putting on a blistering performance, selling out 1,000 capacity venue gigs in the Greater Manchester area whist also establishing themselves as an essential fixture of any serious festival. This combination of disco inferno with incendiary lyrics has captured the attention of a loyal following whose dedication has seen them amass a staggering 2 million streams on Spotify, whilst also benefitting from prominent airplay by Radio X, Radio XS, BBC 6 Music and BBC Introducing.

"Lyrics about love, heartache, getting pissed and politics. They are the poster boys for a new age" – CLASH

Following this scorching summer, No Hot Ashes join the roster of incredible acts playing Hoyfest 2018. Joining the likes of Himalayas, Anteros, Black Waters, Heavy Lids plus many more, you know you need to be at Clwb Ifor Bach in Cardiff on Saturday 29th and Sunday for two days of the most intense rock action.

We speak to No Hot Ashes about how it feels to be one of Britain’s most exciting new bands before they smash it at Hoyfest 2018.

The music of No Hot Ashes takes on the grittier side of funk, what led you to take on this style?

As 4 musicians in the band we all have varying tastes and influences. Something which brought us together as a unit was our mutual love for funk, soul & disco music. The grittiness to the band comes from our equal love for punk and garage rock music. This fusion creates NHA.

Songs like ‘Skint Kids Disco’ and ‘Bad Crowd’ deal with problems in society. How important do you think it is to bring politics to the disco?

Massively important. The older we’ve got the more we have educated ourselves in the world of politics and economical & social issues. We’ve said from the start that the music will always come first but that we will always use our small platform in the industry to promote what we believe is right in the world. The disco element sugar coats the whole thing, if you can get across a message AND make people dance at the same time then you are onto a winner.

Coming from Stockport, is there an expectation to conform your music to what many regard as to how a Manchester based band should sound?

Coming from the outskirts of Manchester (Stockport) people normally expect you to be sounding like The Smiths, Oasis or Joy Division but we’ve never been about that. Manchester has an incredibly wide spectrum of musical talent on offer at present but too many people are drunk on the nostalgia of “90s brit-pop” etc… Yes. That music scene will go down as one of the most prolific in history but we are trying to look forward. To be and sound like something fresh and exciting. Something a new generation can call “their own”.

You seem daring in terms of experimenting with sound and trying out new possibilities with almost any instrument. Is there any direction you wouldn’t take your music in?

Not really, if it suited a song we were working on. We are very open-minded musicians and love to experiment with new instruments and sounds within our music. We’ve had brass sections, strings, synths, glockenspiels the lot. Working with Gavin Monaghan has helped us greatly in that respect. He’s almost given us a sixth sense in terms of writing and experimenting with music.

What is it like working with a producer as fantastic as Gavin Monaghan (Editors, Robert Plant, JAWS, The Twang)?

As touched on briefly before, working with Gavin is always an inspirational experience. He’s helped us develop as musicians and as people and take our music to somewhere we didn’t think we could.

Many acts that are not from London or that do not relocate there often report that its hard to get ahead. How have you managed to succeed whilst remaining in your hometown?

Pure graft. It took us a long time to even get a small amount of notice from the industry as a lot of the labels, booking agents and promoters are based in London. In the last 12 months all our hard work has begun to pay off as we signed deals with Modern Sky UK & 13 Artists. Since then our jobs have stepped up another level. Manchester has always been amazing to us and we can easily sell out venues around 1000 cap now which an amazing achievement for us.

This month has seen the release of the short film ‘Bellyaching’ which has documented your life of being in the band over the past 18 months. How did you go about making it?

We’re really proud the way “Bellyaching” came out. It was filmed and directed by our good friend Sam Crowston who is a very talented guy. We wanted to give our fans and other an insight into what goes on behind the scenes and also an insight into our brains and what goes on when we aren’t gigging. It was quite emotional to see our achievements over the past 18 months and how we’ve progressed.

You make no secret that you are ambitious. Just how big do you want to get and what do you want No Hot Ashes to achieve?

You can’t ever really dictate how big you want to be but we have always said as long we can be earning a living and doing something we love we will be happy. We’d love to be able to take our live shows and music around the world and travel as much as we can. That’s always been a dream.

You have already massed an incredible 2 million streams on Spotify; do you see much financial return for that many plays?

It’s not great and it’s not bad but it’s something. You can’t help but feel undervalued as musicians as so many years of practice and hours of work goes into setting up a live, touring band with little rewards financially in the end. The hope is we can grow and grow and one day be doing shows on a much larger scale, hopefully then the financial reward will be better. As we mentioned before, if we can just get by and earn a living we’ll be happy and feel like we’ve achieved.

How do you go about converting that online interest into record and gig ticket sales?

We’re always active on social media and aim to have content on a weekly if not daily basis. We want our fans to feel close to the band and love speaking to them at shows. We’ve always prided ourselves on our direct to fan approach. We spend as much time as we can interacting with fans online and at shows so hopefully people appreciate that and it seems to be working.

Your gigs at home have reportedly seen you play to packed out venues with a capacity of a 1,000. How have you manged to capture the imagination and subsequent loyalty of so many?

Again, we feel it’s down to our work ethic and persistence. That and writing good bangers (we think) but also we’ve always tried our best to keep live shows entertaining. It comes naturally to us as we love performing to crowds.

You’ve been a frequent fixture on some of the most exciting festivals on the circuit, having appeared at Isle of Wight Festival, Kendal Calling, Y Not Festival, Truck Festival & Neighbourhood Festival. Do you enjoy the challenge of playing to an audience that hasn’t specifically come to see you?

Our favourite time of year is festival season. We do see festival crowds as a good way to make new fans and in recent times we have noticed a lot of new fans coming through from seeing us randomly at festivals around the UK. We always love a challenge and getting people to dance. Luckily for us we’ve seen that we are picking up fans up and down the country now which is amazing to see. Knowing that a small section of the crowd already knows you at a festival and has come specifically to see you always helps.

Hoyfest has an incredible line up which sees you play alongside similarly rambunctious bands such as Himalayas, Anteros, Avalanche Party and Blackwaters. Who are you looking forward to catching while you are there?

Hoyfest 2018 has an incredible lineup. We’re really excited to see Anteros and Blackwaters in particular. We played Hoyfest a year or 2 ago and really enjoyed the Cardiff crowd.

Got any tricks up your sleeve for your Hoyfest slow?

What will No Hot Ashes be doing for the rest of the year, and beyond?

Writing a lot, gigging a lot. Hopefully spending a lot of time in the studio.