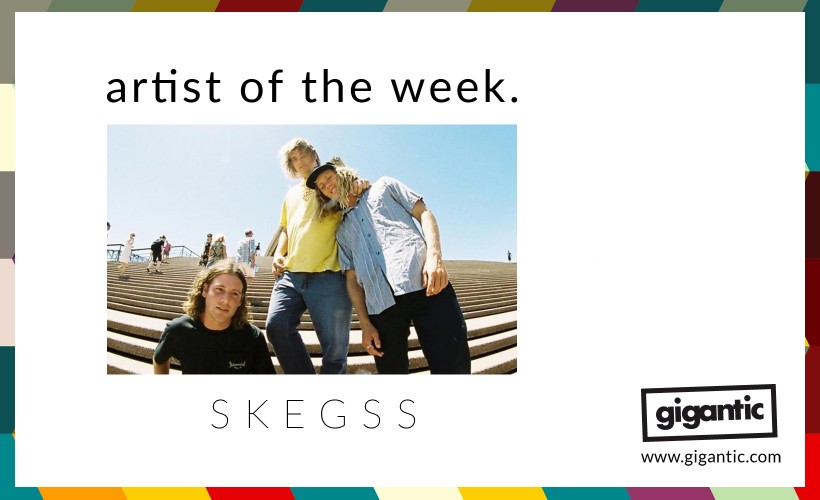 Selling out tours in their Australian homeland and all around the world, SKEGSS never fail to bring the energy despite the inner laidback core of their lofi garage sound and have quickly caught the attention of international tastemakers who rightly recognise how they are poised to become something very special indeed. And with the release of debut album ‘My Own Mess’ next month with UK gigs towards the end of the year, there has never been a better time to get to know them!

Formed in 2013, SKEGSS were originally a quintet including drummer Jonny Lani, guitarists Noa Deane and Ben Reed (AKA Ben Bograil) who takes on lead vocal duties plus bassist Toby Cregan who were just looking to play for beers and good times. A year later, and the boys released their debut single L.S.D. which served as a perfect introduction to their unique take on laid back rock n’ roll and saw them the subject of many column inches in music publications everywhere.

Deane would quit not long after to focus on his career as a professional surfer which did little to deter the slacker gang who carried on regardless. Now a three-piece, their rise was undiminished while they establishing a reputation for their rowdy gigs and by bringing out an eponymous titled EP in 2015

They were soon signed to Ratbag Records, an imprint for major label Warner Brothers, and continued to impress with continuing extended players ’50 Push Ups for a Dollar’, ‘Everyone Is Good A Something’ and ‘Holiday Food’ which reflects the anarchic yet chilled nature of the trio.

This year sees them remain with Ratbag Records for the release of their debut album ‘My Own Mess’ in September. Including the infectious single ‘Up In the Clouds’ and bummed out song ‘Smogged Out’, ‘My Own Mess’ promises to be fifteen tracks of garage punk brilliance reflecting the band’s sliding sanity and capturing their onstage antics and pressing them onto Yellow Vinyl LP accompanied with a 28 page zine illustrated by close collaborator Jack Irvin plus CD and MP3.

“This is our first album. Fuck. We were in a state of non-reality in the studio, we didn’t leave and when it was done I didn’t feel conditioned to go back into the real world.”

SKEGSS ‘My Own Mess’ Tracklist

With the exciting news of their forthcoming first long player ‘My Own Mess’, SKEGSS have also announced a handful of unmissable dates to promote the new material. Make sure you catch them when they head on over to tour in November, tickets on sale with Gigantic later this week so make sure you set your personal reminder right now!

SKEGSS tickets are released at 10:00 on Wednesday.