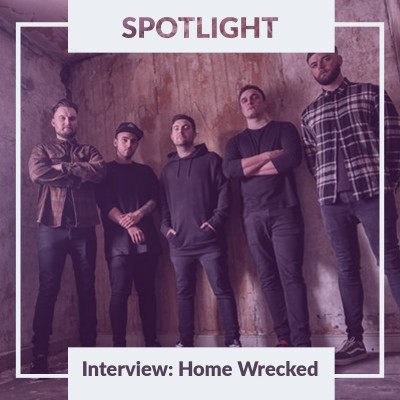 Formed in the summer months of 2016, the band wasted no time in hitting the studio and released their debut EP ‘When All Goes Wrong’ by the end of the year which wracked up an incredible 47,000 streams in the first week alone and saw them added to the Kerrang! TV Playlist.

Now they return with their latest release; ‘Try What You Want, Just Make Sure It Work’. This second EP builds on the wealth of experience they have attained playing to huge audiences at festivals across the UK and Europe whilst also benefitting from more polished production to create a five-track record which really shows off the depth of their song writing ability.

‘Try What You Want, Just Make Sure It Work’ includes the emotive single ‘Nothing Like You’ which features vocals from rising Nottinghamshire based singer Christina Rotondo which really highlights the bands development from their previous record.

Home Wrecked join fellow pop punks Carousel Kings when they tour the UK towards the end of the month. The perfect match of bands means that these will be some of the most exciting gigs of the year, giving Home Wrecked a chance to really show off their new material.

You’re a relatively new band, having only formed in the summer of 2016. How did you first get formed?

I personally (Dan) didn’t know any of the lads before the band. I heard of joe from previous bands and then Al, Ben and cop are from another town so it was the case of joe ringing me and asking if I was interested in working with him and we all literally met up and started writing!

What are the influences that drive your music and what are your ambitions for the Home Wrecked?

Improving definitely drives us. We write a song, buzz over it and then two weeks later we’re back in the studio trying to better ourselves, so I guess it’s just that hunger for success! We’d all obviously love this to be our full-time thing so we won’t stop pushing it and ourselves till that’s the case!

Your debut EP ‘When All Goes Wrong’ seems to have been written in breakneck speed, released before the end of the year. How did you complete it in such a short space of time?

Straight away from the first practice we had as a band we started laying down ideas. The songs just came out one after the other.

It was so much fun writing that EP because we didn’t know what to expect and how the songs would even turn out! Luckily, it went down a treat!

Your first EP included the single ‘Never Say Never’ and the riotous video was streamed on YouTube a staggering 47,000 times in the first week alone. How did it feel to know you had gone viral?

For a band that literally just put out its first song, it was amazing! We Did NOT expect that!

There is a fair bit of drinking in the video. How did you all feel the next day?

And now you are poised to release a second EP; ‘Try What You Want, Just Make Sure It Works’. What can you tell us about the new record?

It’s definitely a different direction for us, we wanted to take our time in writing songs we felt communicated a bit more on an emotional level to the listener as our first EP had a lot more of a ‘feel good’ vibe to it!

‘Try What You Want, Just Make Sure It Works’ is released on Friday April 20th through Primordial Records. How did you manage to grab the label’s attention?

We heard Primordial were keeping track on us and they heard the EP and wanted in! They have a great team and the support has been great!

It features the breakup song ‘Nothing Like You’. Where did the influence for this song come from?

The song comes from a situation we’re all familiar with, heartbreaks, break ups etc, it can leave you in a dark place at times and make you doubt everything. So, we simply wrote a song about it!

‘Nothing Like You’ sees you team up with rising star Christina Rotondo who contributes vocals. What is your relationship like with her and what was she like to work with?

Christina was great to work with! She tracked her vocals at her studio at home and we didn’t actually meet in person till the video shoot for ‘Nothing Like You’. She’s a great person and hugely talented!

Tracks ‘Back On The Grid’ and ‘Red Card’ deal with themes of anxiety which is something which you also addressed on your previous EP. Why do you think it’s a widespread problem which really seems to be blighting this generation?

We think it’s because everyone knows about anxiety a lot more now, whereas maybe a few years ago not as many people were aware that anxiety was an actual day to day battle we all had to endure.

‘Stepping Stones’ is a coming of age song which optimistically looks to a bright future, but also recognises the jealousy of others which comes with the success. Is this based on real life experiences?

It very much so is! Lyrically, Joe nailed it. Some people you thought that would of been there through your success and failures and there to support you, actually vanish off the face of the earth and are nowhere to be seen.. fake friends, we’ve all had them!

But mainly it’s a feel-good song, it’s bouncy, Catchy and tells you that you can do absolutely anything if you want it enough.

You must be eager to show off the new material to audiences. Which new songs are you most excited to play live?

‘Stepping Stones’ always goes off! Definitely excited to be playing these songs and who knows, maybe there’s even more surprises...

It must be very exciting getting called upon to support Carousel Kings. How did that come about?

It’s definitely a great first opportunity for us to learn from them!

Last year saw you play a huge number of festivals. Can we expect you to be doing the same in 2018?

Well so far we have just the one festival as we’re currently writing an album which is about half way done!

What else can we expect from Home Wrecked in the near future?

Thank you for taking the time to speak to Gigantic. Good luck with the release of ‘Try What You Want, Just Make Sure It Works’ and we hope you enjoy the tour!