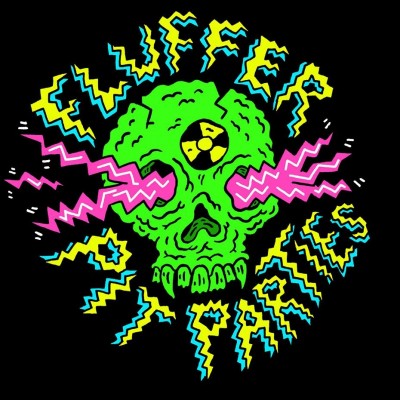 Spontaneous, irreverent and in your face; Fluffer Pit Parties declared war on stagnant gigs and their predictable conventions by pulling bands from the raised pedestal of a stage and placing them on the floor amidst the audience. Such a simple transition changes the dynamic from being a rigid routine of playing through the set, insincere thanks from the singer and obligatory encore to a true communion between the performing act and reveller which reinstates the true riotous spirit of DIY punk where anything can happen.

The first Fluffer Pit Parties were held in the basement of the sadly missed East London venue Power Lunches. Now, they often try adding to the sense of adventure by keeping the venue a secret to the very last minute, sometimes using old warehouses which are perfect for the anarchic atmosphere.

Each event is put together by the expert curation of independent label Fluffer Records and with previous acts including the likes of Japandroids, DZ Deathrays, The Wytches, The Black Lips and Future Of The Left, you can be assured off a non-stop joyride from start till finish.

Their most recent triumph has seen them take METZ, Ringo Deathstarr, The Wedding Present, Idles, Life and a whole load more to their Double Fluffer Pit Party for SWSX in Austin, Texas, from which local residents are yet to have recovered.

In the lead up to this truly amazing event, we spoke to Leeds-born Fluffer Pit Parties founder Al Brown about where he got the idea for such a unique setup for a gig, how they go about choosing the awesome acts and the work which goes into ensuring you have a damn good time!

Leeds is a city well known for its DIY music scene. Did your hometown shape your expectations of how a gig should work and feel?

Haha. Massively, I felt people take in gigs a bit differently in Leeds, they’re a bit looser, you go down to get pissed up, jump around and have a night out.  People tend to intellectualise music more in London. There’s definitely a different vibe. We go for the former. And judging from the crowds at Pit Parties it’s working, crazy every time!

Where are your favourite places to go see live music in Leeds?

Well a lot have closed down like most towns but now, Brudenell Social Club is awesome. Temple of Boom, Wharf Chambers. KARMA are a Leeds based promoter who put on great stuff. I went to KARMA FEST last year it was a lot of fun

Why did you decide to make the move down to London?

The bright lights. Streets paved with gold. To meet the Beefeaters.

How did you get started putting on your own gigs?

We put on a gig in Powerlunches basement with a then infamous Slaves headlining, God Damn supporting and my own band Love Buzzard. Was a great night, except Laurie had all his new lyrics stolen by a homeless guy. I hope he used them to get a few gigs himself.  Powerlunches was class, untold mayhem happened in that basement. RIP Powerlunches.

We love the unique way of having the bands centred in the middle with the audience surrounding them at the The Fluffer Pit Parties. It changes the dynamic from performers removed from spectators to being more of a communal experience for everyone involved. Was that your intention with this format?

Certainly was. Get rid of the barriers have the crowd and artist as one. The energy is much more all-consuming when the crowd surround the band. It’s very much less an us and them feeling. It heightens the atmosphere 100000%. If you haven't tried it I highly recommend it! Next Pit Party is May 4th in Dalston.

You have recently returned from Austin, Texas where you put on an immense line up to showcase at SWSX which included METZ, Ringo Deathstarr, Idles, Life plus so many more amazing acts. That must have been a crazy time. Tell us what happened!

It went off! That’s what happened! The positivity, energy and all round communal aspect of the SXSW Pit Party was off the Richter scale. Everyone moshing and singing along together in live 360 surround. Idles set was probably one of the best gigs I’ve ever been to myself. And everyone else was class too.

Steve Lamacq was in the thick of it too. He loved it. And he insisted on queuing rather than going on the guest list. What a legend! More of that attitude industry people please!

The upcoming Fluffer Pit Party at Hackney Arts Centre on Friday 4th of May boasts an impressive line-up, including Pulled Apart By Horses, Husky Loops, Baba Naga and Girls In Synthesis. How do you go about selecting the acts?

We are constantly listing to bands. If they sound good we look to put them on. We’ve been trying to make a date work for Pulled Apart By Horses for a while so over the moon to finally have that coming up. For my money one of the best live bands in the country. There sets are always nothing but completely thrilling.

And as with all Fluffer gigs the supports don’t provide filler, all killer. Time and time again I have people commenting saying, so and so were great but I got down early for the supports and they blew me away too. We really put a lot of focus on getting great supports.

In addition to all the amazing acts, Fluffer Pit Party always take place in some really interesting locations. What have been some of your favourite previous settings?

Really enjoyed the one in Teresa Mays kitchen. Actually - maybe that was dream, or a nightmare perhaps.  She keeps saying no.

Warehouse shows are always class, we’ve unfortunately been banned from most of them now. Epic’s Turkish Ballroom, The Old Coronet theatre. Take your pick all great! Hackney Arts Centre will be super special on the 4th.

Using secret locations to hold these special gigs must have the feeling of staging some sort of heist with the added dangerous thrill of not knowing exactly how it will play out. Have there ever been any previous events which you really struggled to make happen?

You know what, every event is a struggle in its own way. But a good struggle! We put so much energy into each show that it takes a lot to put together. But the results are worth it and we have a lot of fun along the way.

Back in the day we once promoted a normal show at the wrong venue. Turned up ours was 500 metres up the road in a different basement. So, we packed out the wrong venue and ours was empty. That promoter must have thought he was bloody Michael Eavis!

The Fluffer Pit Parties are always accompanied with some pretty wild gig posters which give the nights a distinctive style. We love the extreme artwork you use, who designs your posters?

The 5th member of Fluffer. Russell Taysom! The main man. A complete legend. We’re very lucky to have him on board. We give him free range and never censor.

We’ve had a few bands pull out because they’ve been offended by the artwork. Well fuck ‘em. They know how we roll!

Who would you love to put on in the future, and where would you hold it?

I’d love to put on the inevitable Black Sabbath Reunion gig as a Pit Party in the middle of a volcano in Iceland. That would be cool.