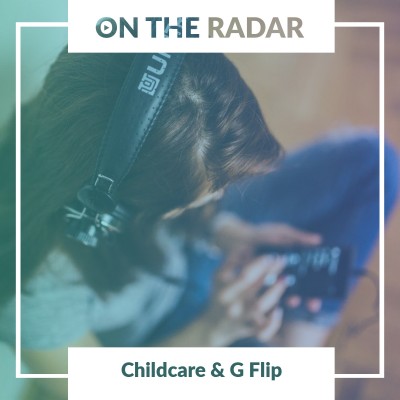 Bands can have some pretty weird names which leave you scratching your head as to where they came from – and you are probably wondering where a West London based art punk quintet would come up with a title like Childcare.

The band claim inspiration for their name came after Ed Cares, their originator, was overheard humming a self-penned tune by children whilst working as a nanny.  Recruiting Emma Topolski (Bass, Vocals), Glyn Daniels (Drums, Backing Vocals) and Rich Legate (Guitar, Backing Vocals), the band was fleshed out enabling Cares to write nuanced LoFi tracks which pack in an enormous amount of gliding guitar riffs and layered melodic vocals.

Last year saw the release of their debut EP ‘Made Simple’ which saw them achieve nationwide radio airplay, including a BBC Radio 1 Maida Vale session, and attract the attention of the most highly acclaimed tastemakers in the music press. This prominent media attention was combined with high profile festival appearances which helped them quickly spread their name across the UK.

Now they return with their follow up, the ‘Luckyucker’ EP which was first introduced to the world with the pondering song ‘Put Down The Pen’. The second single to be taken from the record is the single ‘Bigman’ which seeks to move past the simple us-versus-them dialectics which seem to be moving from social media into the real world, choosing real understanding instead.

"There's a place for fighting and affirming the values you stand up for, but too often we ridicule and dismiss those we disagree with. I'm bored of broad-brush Tory bashing and of hearing that everyone who voted for Brexit is stupid. This song is a reminder that we need to listen and try and understand those who believe differently from us." - Ed Cares

Childcare have announced an Autumn 2018 tour with tickets already on sale and selling fast. Plus, they join the incredible line up for Camden Rocks which takes over all of North London’s most vital venues on Saturday 2nd of June.

Georgia Flipo AKA G Flip is the innovative bedroom producer look set to take over your life this year. The Australian multi-instrumentalist has just released her banging synth-pop single ‘About You’, an infectious track which feels so effortless, spacious and free. ‘About You’ shimmers with joy as she sheds the toxic relationship she’s moving past.

Flipo’s first forays into music came after being bought a drum kit when she was just nine years old, after showing a real passion for the instrument. But with little to no female percussive role models, she took real inspiration as well as lessons from her High School teacher Jenny Morrish who had a background in drumming for bands.

“Back in 2006/7 you couldn’t turn on Rage or look online and there’d be a girl drummer out front... My drum teacher was my absolute idol, I bought the same drumkit as her, the same sticks as her… she became one of my absolute best friends." - G Flip

Tragically, Morrish would succumb to cancer at the young age of 31. An inadvertent lesson which taught Flipo that life is precious and you need to seize your chance right now. Within weeks she was trying out for bands and was touring the US with hard hitters Empra.

Working with Empra gave Flipo the vital live experience needed to expand the skills developed throughout her childhood. Now entering her 20’s, Flipo had already been drumming for a decade and she once again began to look to the future and work out what direction she wanted to take.

Locking herself away in her bedroom with a midi keyboard, she experimented with ideas, genres and styles to find her very own sound. She soon discovered that her future in music came from her past as a drummer and she soon began producing her immense electronic beat-based debut single ‘About You’ under the new name G Flip.

“I always thought that if I’m going to come into this music world as a chick drumming then I want the first thing I do on the drums to be a little bit of a solo… it just felt right that that would be the first song.” - G Flip

Paired with a suitably DIY video which sees Flipo perform in the very bedroom where she produced and recorded ‘About You’, the song has quickly gone viral and seen her proclaimed as one of the hottest new acts this year.

Now, G Flip heads to the UK as one of the essential cutting-edge acts which make up Dot To Dot Festival 2018. The travelling festival takes over the very best clubs and gig venues of Manchester, Bristol and Nottingham on the latter May bank holiday weekend.