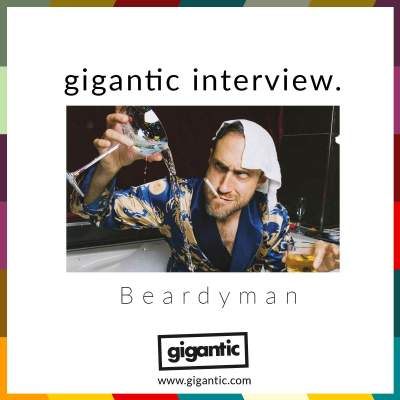 Award-winning beatboxer Beardyman (aka Darren Foreman) combines his considerable vocal talents to create the funkiest hip hop breaks and biggest drum and bass beats with the aid of just a microphone and loop pedal.

Innovative and enigmatic, his comic character shines through his music and his pioneering spirit has seen him become world famous and recognised as a leader in his field.

With a major gig fast approaching, he releases his new single ‘6am (Ready to Write)’ that includes a sample of stand up comedian and podshow host Joe Rogan recounting gonzo journalist Hunter S. Thompson's drug diary which is accompanied by a SERIOUSLY messed up video. Remember kids; don’t take drugs!

Gigantic spoke to Beardyman ahead of his headline show at London Oslo taking place on Wednesday 6th of November about his mind bending new single, bringing beatboxing to the world at his very own TED lecture and just how he makes those incredible noises!

What was it that first attracted you to the dark arts of beat boxing?

Beatboxing is the fastest way to get a musical idea into the world. It was Michael Winslow and Rahzel that first attracted me to it. It’s the most flexible instrument in the universe. Unfortunately it’s monophonic so beatboxing for me leads naturally to looping and use of effects which is my obsession.

Can anyone learn how to beatbox or are only certain people born with vocal abilities and mental aptitude to layer rhythms?

It’s like anything, aptitude for any given task is spread unevenly throughout the gene pool. Some people are naturally physically strong, some super intelligent, some can imitate voices and instruments. I am all 3. I am the ultimate person. I can retract my penis also and I have webbed feet.

Do you ever miss not having the support of collaborating with other band members on stage or do you enjoy all the attention being on yourself?

Bands are long. My advice is don’t start one unless u absolutely feel that it’s the dream of all the members to work with people just like everyone else in the band on the kind of music you all want to make and that you all click on every level. Otherwise you’ll break up super easily.

That's my experience anyway, it’s not true in all cases, sometimes people with profound differences can stay together despite all the odds, but that’s rare. Bands are expensive to run. You need crew, money gets divided and divided, it’s tough.

But being a one man band can be isolating and lonely if you’re not careful. It’s like anything, you swing a dog in enough directions and at some point you’ll hit a cat. But just don’t think that owning a cat is easy, 'cause some of them shits will tear an eye clean out of it’s socket for nothing less than an excuse me. What is Sushi without the Banshees? A burning malapropism in full fisted flight, a mere typo in the byline of time. Tarry... tarry....

Your new single sees you sample Joe Rogan talking about Hunter S. Thompson’s incomprehensible daily drug use. What inspired you to write a track about this?

It’s my comfort movie. My Mrs had twins and I was keeping them alive one night while she slept, but was keeping myself sane watching Eric Andre, Joe Rogan and ‘Fear And Loathing In Las Vegas’, for like 4 months. It was a weird time.

The video certainly embraces horror and feels like Guillermo Del Toro had been commissioned to make a sequel to ‘Blow’. Where did the ideas for the video come from?

From Ian Pons Jewell, the director.. he’s insane, but possibly a genius also.

Joe Rogan explores the weird and wonderful on his podcasts with a particular interest in conspiracy theories – did you guys talk about any of the strange stories Rogan has come across?

I’ve only spoken to Joe directly once, through DMT. He came to me as a multidimensional sprite and told me everything would be fine.

What was it like working with Fatboy Slim (aka Norman Cook) on the hit single ‘Eat Sleep Rave Repeat’?

I thought nothing of it at the time cos it was just a silly session, but Norm is a genius and just knows effortlessly how to make hits and grooves and wacky, engaging, banging vocal house tunes.


You have twice taken home the trophy for winning the UK Beatbox Championships. How do you psyche yourself up for a tournament and what is going through your mind before you hit the stage?

That shit was years ago, but from memory, i remember it being the hardest I’d ever worked or concentrated on anything ever... like psyching yourself up for a 100 metre sprint. Focus, no mind... all intention. Such a rush, so much peril.. it’s like a bull fight or something.

Do you ever find the concept of competitive music making slightly strange or does it give you that extra buzz to push you even further?

All music is competitive if u think about it. Everything is for that matter. Without competition life would never have existed. It’s vital for development.

Beatboxing could be described as the purest analogue form of hip hop, drum and bass and techno ever. Is there anything beatboxers can do that DJs on decks or producers using digital equipment can’t or that is totally different from the instrument dependent methods of those genres?

There are no boundaries with anything really these days.. not with the diversity of peoples tastes and the readily available next level technology that exists today. It’s restrictive being a beatboxer in some senses though, just in terms of the polyphony possible with a mouth. But with looping tech u can do wild stuff.

It’s hard to compete with a DJ sonically as they have everything at their finger tips.. ready made tunes... it’s cheating in a way to be a DJ, but a DJ can’t achieve the feeling you get watching someone actually making the music, layering it down in front of you.. it’s kind of a magic trick.. plus a DJ can’t improvise as freely as someone literally making it up live in front of you. That’s a unique connection between a live performer and an audience that a DJ doesn’t have access to. That’s why DJ’s often have amazing visuals.

Nina Kraviz bravely did this weird and theatrical show at Coachella that aimed, I suppose, to break the traditional format of the DJ, person behind table with LED wall. I liked it.

We love your hilariously anarchic YouTube videos ‘The Kitchen Diaries’. Where did the idea come from to subvert the cookery programme format and would you ever be tempted to bring them back?

That was actually my dad that did that, beardyman I. I am beardyman II.

How did you become involved with the TED and did you ever think you would be giving a lecture?

There actually is no TED and never was. It’s all a spectral illusion, black ops shit. CIA shit. I’ve already said too much. If I die remember I was NOT suicidal, they made it look that way.

What surprises do you have instore for us at your upcoming gigs?