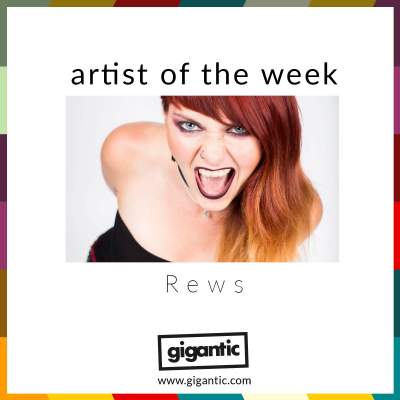 Need some raucous indie rock in your life? Then get on board with Rews. The high energy band proved themselves on their incredible first album ‘Pyro’ and now look set for even bigger things in 2020 with the release of follow up as yet untitled record!

Rews was formed in 2014 by Northern Irish musician and songwriter Shauna Tohill who quickly impressed and spread the name of two-piece Rews with fierce live performances, Shauna taking on lead vocals, guitar and piano and teaming up with a just a drummer. Small in number yet zero compromise in their music, the pair are able to concentrate on their essential driving sound which sure packs a punch!

In 2017, Rews signed to the label Marshall Records for the release of their fiery debut album ‘Pyro’. It would feature their dark and beguiling lead single ‘Miss You In The Dark’ which was the first sign of Tohill's true potential with the band. This would be followed by ‘Shine’ which had the hard edge and massive riff that made it a fan favourite plus ‘Your Tears’ and ‘Shake Shake’ which both have huge commercial appeal and revealed the Rews huge range.

The reaction to their first album was huge, seeing the band attract huge critical acclaim with Huw Stephens enthusing about their incredible onstage performances and Planet Rock Magazine nominated them in the running for their Best New Band poll. Rews would rock the John Peel Stage at Glastonbury Festival having been specially picked because of the reaction to ‘Pyro’, plus would earn a place supporting Halestorm at their massive show at Brixton Academy and play to packed out venues on their own headline tours.

Next year, Rews have just announced that they are back with a massive tour plus expect to drop their highly anticipated second album! See them tear around the UK in March 2020 where they are sure to thrill the crowd with their hot new material plus all the songs you love from ‘Pyro’. Grab your tickets with Gigantic and we’ll see you at the front – make sure to tag us in all your pics and use #GiganticGigGoer!