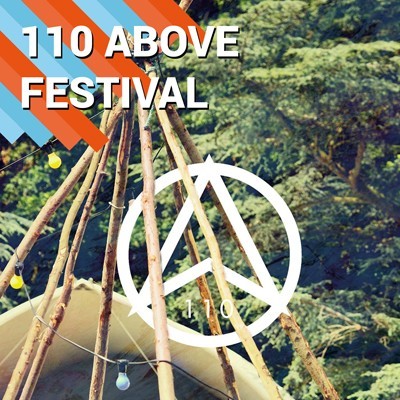 For a weekend in June a small corner of Warwickshire is taken over by 110 Above, a festival small in scale but massive in ideas, up and coming bands and entertainment. We caught up with Michael Lain the festival boss to find out what it is like to run a festival, and if whether or not he gets any sleep over the weekend!

So Michael, tell us a little about 110 Above?

110 Above grew out of a family party, which became known as “Lainfest”.  In 2015 we changed the name to 110 Above to effectively give the festival a fresh start although we maintained the same core team and values.  The new name reflects how high the festival is above sea level.

And, how did the concept for 110 come about?

The festival grew out of a party that we would hold on the farm for friends and family.  I’m a keen organiser and festival goer so decided the experience needed to be shared more broadly with new friends and family from all over the country and beyond!

And what was the most challenging element of this years?

The weather and, I’m sure with many festivals, managing the finances is always rather stressful given the level of risk that is taken.

What about the best bit of this year?

Firstly, the accomplishment of having music boom from the mainstage on time despite a rain “shower” lasting for one week, which flooded the festival site and make things 10X more challenging through the crucial build phase. The most important thing for us was the positive feedback that we had from attendees; it would be devastating to put in so much effort each year to then get negative vibes!

My top 5 picks would include Coasts, Little Comets, Eliza and the Bear, D.I.D and Sundara Karma.

What about an average day on site, where can we find you?

Each year I promise to give myself a more laid-back public relations style job but ultimately this is never possible so I generally act as a crisis management guru – running around like a bit of a headless chicken most of the time, probably!

With the beauty of hindsight would you do 110 Above any other way?

Each year of running the festival has given layer after layer of experience, which we put into the next year’s event.  If I had all of the knowledge I have now, I’m sure I’d do things differently. One key lesson learnt is that it’s not as easy as you may think so do not be naïve!

So what about those reading this who fancy starting their own festival. What advice would you give them?

It’s a very competitive market so don’t go into it expecting to “win big” and make instant profits.  Having read a number of articles one of the best quotes I saw was along the lines of “if you’re a good business person, you wouldn’t organise a festival”.  To this end, my recommendation would be to only take risks you can afford and, if you have a true passion, make sure you also have someone involved who is well grounded from a financial budget perspective.  My fiancé who’s an accountant does a terrific job of this!

I would also emphasise the importance of working together with others as I have learnt it’s impossible to run a music festival alone without getting to a breaking point.  We’ve built up a fantastic group of passionate and professional people who all add value to the event.