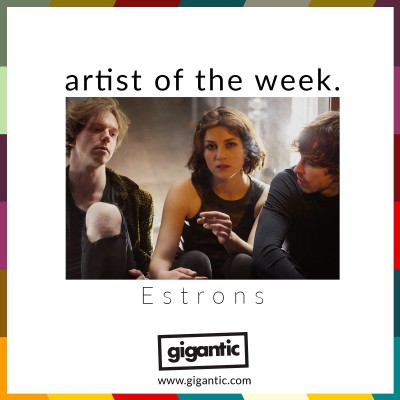 Centred around the talents of guitarist Rhodri Daniel and singer Taliesyn Källström, Estrons are the Cardiff based alt-rock band that have been steadily growing their fanbase and look set to break into the big time with the release of their first full length album ‘You Say I’m Too Much. I Say You’re Not Enough’ later this year.

Started in 2015 after teaming up with drummer Hugh Parry and bassist James Keeley, Estrons is the Welsh word for aliens which reflects the sense of alienation they feel which they channel into their challenging and often confrontational lyrics that works perfectly with Källström’s powerful vocals which they combine with lacerating guitars played at lightening fast speed, making for vital viewing whenever they play.

This summer has already seen them play a surprise free gig at House Of Vans in London, tear round the festival circuit playing Latitude, Leopallooza and Y Not plus be invited to perform a live session for Annie Mac’s BBC Radio 1 show at the illustrious Maida Vale studio which included their own interpretation of the classic All Saints song ‘Black Coffee’ – their first ever cover – which you can listen to HERE.

Ever since they first formed, Estrons have eagerly entered the studio and quickly recorded and released the single ‘Make A Man’ which saw the band grapple with gender politics in a three-minute blast of furious energy which appeared on their debut EP ‘Whoever She Was…’.  They continued to impress with subsequent singles ‘Drop’, ‘Strobe Lights’, double A-side ‘Glasgow Kisses’ / ‘Cold Wash’ and their ‘She’s Here Now’ EP.

Given their impressive output, many have enthusiastically awaited their debut album which they have recently unveiled will be titled ‘You Say I’m Too Much. I Say You’re Not Enough’ having completed it earlier this year. They inform us that it is a summary of all their previous work, looking at the contradictory aspects of the human condition, the ensuing beautiful chaos that can cause and the mutual attraction that can come with opposites.

Speaking about the album's title, Källström commented; “It’s just meant to be a comment on how we’re all different and we all deal with ourselves in different ways. We all have dark moments; we all have good moments. There’s a way that you’re expected to behave as a mother, as a partner, as a colleague, as a friend. I just want to allow people to stop putting themselves down all the time. It’s probably one of the hardest things to do. I still battle with it every day.”

The first sample of the forthcoming record came with lead single ‘Lilac’ which builds on their knack for penning relentlessly racing songs with blistering hot riffs. The second taste comes with the track ‘Cameras’ which may take a more sombre tone, is in no way less passionate. Written as an expression of love for her son, Källström makes it absolutely clear there is nothing she won’t do for him explaining its about “that one love that can’t be broken, no matter how many times people try to break it down.”

‘You Say I’m Too Much. I Say You’re Not Enough’ is released on Friday 5th of October through Gofod Record and is available for pre-order on MP3, CD, LP and limited numbers of Orange Splash Edition LP. Also, Gigantic has tickets for their upcoming tour during November in support of what is expected to be an absolutely killer album which you can order right now. Estrons have also announced a massive gig at London Scala which takes place on Thursday 7th of February in the new year.