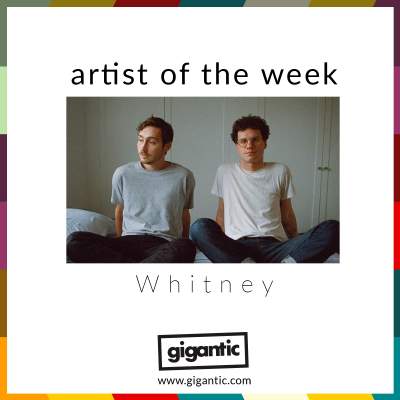 Following the end of his cult band Smith Westerns in 2014, drummer Julien Ehrlich set about creating Whitney. Awash with nostalgia, they take indie folk to a new level as Ehrlich employs a gentle falsetto to lilt over mellow tones.

With Ehrlich still behind the drums whilst also singing, their other band members include fellow principle songwriter Max Kakacek plus Josiah Marshall, Will Miller, Malcolm Brown, Print Chouteau, Charles Glanders and Ziyad Asrar.

Signed to Secretly Canadian, Witney released their critically acclaimed debut LP ‘Light Upon The Lake’ in 2016. Whilst it didn’t exactly break into popular consciousness or become a zeitgeist shifting record, the sleeper hit did gain a dedicated following amongst a global audience and was found in many of the more astute album of the year list and polls. With fans appetites truly wetted, many have been eager to hear what the chilled Chicago kids would create next – and we have just been treated to their brand-new record.

The band stuck with Secretly Canadian for the release of their sophomore album ‘Forever Turned Around’ in the final days of this summer. Although it is in keeping with the previous material, this time the sweet melancholy is mixed with a sense of trepidation – capturing the anxiety experienced by liberal America under the Trump administration.

“Once we finished the record, all of the lyrical content and everything was, we thought, an accurate depiction of me and all my friends in America and how we’re feeling right now. A little bit of weary uncertainty — and sometimes extreme uncertainty.” – Julien Ehrlich

After reuniting with original rhythm guitarist Ziyad Asrar, they Whitney returned to his basement Chicago studio where they had written much of their first album ‘Light Upon The Lake’. It enabled them to recapture the initial creative energies and rekindle that early excitement and help them in the process of creating something truly great.

“Getting down there was so important because we’ve always used that basement for music. The comfort and familiarity mattered but having Ziyad be a buffer between us was so helpful.” – Julien Ehrlich

Following their time in familiar territories, ‘Forever Turned Around’ was recorded with producers Bradley Cook (Hand Habits, Hiss Golden Messenger) and Jonathan Rado (Weyes Blood, Father John Misty) during several sessions snuck in whilst travelling across the US. This allowed room to experiment and brought forth opening song ‘Giving Up’ which started off as a playful jamming session with Ehrlich on guitar and Kakacek playing a Wurlitzer, the luscious string arrangements of ‘My Life Alone’ and the title track which closes the album on a beautiful if not sombre note.

Whitney will tour the UK in November, playing their new material plus tracks from their seminal first record too. Tickets are currently on sale with Gigantic, so book yours today!