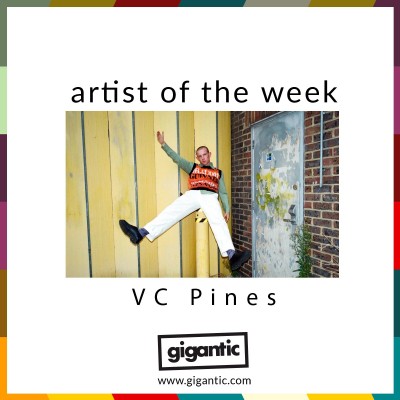 The new sound of Neo-soul; songwriter and former frontman of The Carnabys VC Pines (AKA Jack Mercer) pours sugary sweet sounds over his gritty lyrics, creating a wonderful juxtaposition of ***. Poetic yet raw, his powerful performances have already marked the London lad as an essential breakout artist and one to watch in the new year.

Having already released his Concrete EP, VC Pines has just dropped new single “Be Honest” ahead of a 2022 tour – tickets on sale with Gigantic right now HERE.

Mercer released his critically acclaimed EP Concrete in May which features the singles “See You Soon” and “Compared To Someone Else”. Though only four tracks long, Mercer’s magnificent vocal gymnastics combined with his unique style marked the record as a crucial listen.

“Lyrically, ‘Compared To Someone Else’ is romantic, nostalgic and fearful. It’s about looking back over times of lost love and having a fear of losing it all and in the end, being compared against something potentially more fulfilling. The song also has an understanding of the general day-to-day of being in a relationship, which for me feels like it’s reaching boiling point. Something has to happen. The main melody has always reminded me of a time I waited for hours in a hotel in Tokyo that had this 30-second jazz melody on a loop literally all day long. It drove me mad. But I wanted to replicate that monotony in an emotional, nostalgic way.”

Continuing his creative high; Mercer now reveals his brand new single “Be Honest” which is his ode to the trials and tribulations that this most difficult of times has challenged us all with, whilst also including some very personal problems and reflections of his own.

"Be Honest is a culmination of things, it was written towards the end of 2020 - the year of fuckery. So the beginning has this distrust and wariness I think we all had at the time. I wanted to convey my own mental health struggles and of those around me due to these strange, uncertain and lonely times. The tune explodes into this 'no fucks given' feeling that boils and spills over into a sense of paranoia."

"I'd definitely been burning the candle at both ends when this song formed, so I think it's a small yelp for help but at the same time, encompasses the nervousness of the youth of this country. Working on this with Tobie Tripp was dreamy, we really focused on every layer, from BVs to brass to flute and then he sprinkled his magic string playing on top. It has this meatiness to it, but because each layer is so in and out, it has this child-like 'dares' quality to it which I love."

VC Pines is the vital sound of British youth sweeping across the U.K. and looks set to become one of the biggest new names of 2022. Don’t miss out and make sure you book tickets to see his headline dates in March – tickets on sale with Gigantic right now!