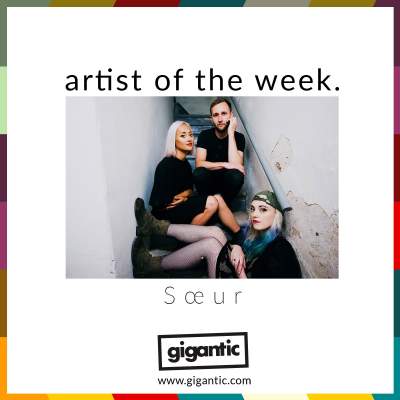 Every once in a while, a fresh new act will stop you in your tracks and demand you take notice. Sœur are the latest Bristol based band impressing everyone who hears them. The dual fronted trio includes Tina Maynard (Guitar/Vocals), Anya Pulver (Guitar/Vocals) and Jim Collins (Drums) who draw upon the scuzzy power of grunge, the addictive rhythms of math rock and round it off with pop sensibilities to create music with an experimental edge which has that satisfying polish of a well-structured song.

Sœur burst onto the scene towards the end of 2015 with the release of their blistering first single ‘Pass Out’ which is accompanied with a promotional video which sees them tearing it up around Berlin. The past year has seen a real acceleration for the band having brought out their debut EP ‘What Separates Us’ which features the soulful track ‘Put You On’, plus singles ‘No Fire’ which captures the energy of their gigs in the video and ‘Fight’ which wracks up the tension to an unbearable level before exploding into a rampage of riffs.

Their unconventional style, featuring two singing guitarists and no bass player, combined with a real talent for innovative song writing means that their music swings from aggressive to emotional and has capture the ear of listeners across the UK and beyond. Not only do they play to packed out venues, they have become an essential festival band having been featured at Leeds \ Reading, Dot To Dot, Handmade and ArcTanGent – they have even bagged themselves a session at the iconic Maida Vale studios for Daniel P Carter’s BBC Radio 1 Rock Show!

We were lucky enough to speak to Sœur and ask them a few questions about how they got started as a band, the challenges for acts trying to make their break and the inspirations behind their fierce music.

How did you meet as a band and first get started?

[TINA] Anya and I used to live in Droitwich/Worcester and so knew each other through the music scene. We both fronted our own bands and used to gig together quite a lot. Coincidently our bands broke down roughly at the same time and so when Anya moved to Bristol she convinced me to join her and start a band. Jim met Anya at ArcTanGent a few years ago and his current band were breaking up too so we nabbed him.

[ANYA] We never actually performed together until we got offered a free skiing holiday in Norway so we blagged a 3hr covers set. It wasn’t until our former bands split up and I moved to Bristol that we got drunk and actually decided to start a band. I met Jim, by chance, at ArcTanGent festival and it just happened to be that his band of 10yrs was about to call it a day and he was on the hunt for a new project to get involved in.

There seems to be a real visual element to the band, having created really engaging videos for ‘Pass Out’, ‘No Fire’ and now ‘Fight’. How important do you think it is for bands looking to make their break to focus on the promo videos?

[TINA] In this day and age, it’s really important to have a visual presence. We’ve found that it’s actually at our live shows that we really win people over, hence having live performance aspects in all of our videos. That said, there are no set rules and I guess we just try and extend our creativity into the realms of ‘TV’ when we’ve got to. We’re extremely lucky to have been able to work with some talented videographers/video producers and that always helps. Ben Pemberton at Bravo Oscar did ‘Pass Out’, Noomie Spook did ‘No Fire’ and Aaron Shrimpton at New Waverley Studios did ‘Fight’.

What other challenges have you encountered as a new band?

[TINA] Bands encounter numerous challenges and I don’t think we’re different to any other band in that respect. For most bands, you’ve got to be a whole company at the beginning. Promoter, booking agent, manager, graphic designer, driver etc, all whilst holding down a job (cos the band doesn’t pay much and actually costs a lot) and making sure you enjoy your life at the same time. It’s tough but we’re not complaining, merely stating that it’s hard work.

Bristol is a city long known for being an excellent breeding ground of fresh new talent. Is that why you chose to move there and how do you fit into the scene there?

[ANYA] Bristol is awesome for music. When I first moved there, about four years ago, I realised quite quickly that there was an amazing community surrounding the DIY band scene, I spent weeks going to gigs all most every night and made so many amazing friends. I feel like, as a band, we don’t quite fit snugly into a specific scene but instead exist on the fringes of a few different ones, which means we get to play shows with so many different kinds of bands, which we love.

[TINA] The few music venues we have left, mean that we get to play gigs that are the right size for us and that makes us able to develop as artists. Thekla was under threat of having to close down recently and won it's fight so it's also nice to know that people are looking out for these venues that have made Bristol such an interesting place to live in in the first place. We fit in just fine.

How did you come to the decision of having dual vocalists?

[TINA] It’s funny cos that decision came with the decision to start the band. They were never separate things in our minds, it was always going to be this way.

‘Fight’ sounds like you are addressing a specific person; what can you tell us about the inspiration for the song?

[TINA] Following a conversation with an old friend, I was inspired to write about how he’d fallen in love with the idea of protecting his country but ultimately left the army despising what he was fighting for. It made me think of all the other ways in which people, including myself, blindly follow something without really realising why. Like a lot of our songs, it’s meaning transcends the situation.

[ANYA] I think it’s easy to accept what we are taught, but it is only by questioning it that we truly learn. Whether it’s a war, an abusive relationship, a mental illness or a society-instilled stereotype, this song reminds us that we have the power not only to stop fuelling the cause but to actively fight against it.

What are your plans for the band in the future?

We’re about to release an EP (November 17th) and are busy writing, going into the studio in December, getting ready to smash 2019.

We are absolutely loving the raw sound of Sœur, and we are so thankful that they took the time out to answer our questions. Next month sees them head out to play some gigs which give you the opportunity to hear their forthcoming material performed live! Do not miss out and make sure you book your ticket right now!