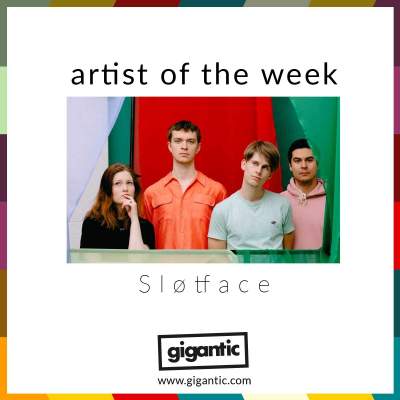 Sløtface are also well known for their political activism which often directly influences their music. The band has taken a strong feminist stand plus environmentalist issues are a reoccurring theme, with the video for their single ‘Sponge State’ raising awareness of the Nordic Mining dumping over 250 million tonnes of harmful waste chemicals into a fjord at Førde, making headlines around the word.

Formed by singer Haley Shea and guitarist Tor-Arne Vikingstad in 2012, the band initially was titled Slutface when they were joined by bassist Lasse Lokøy and drummer Halvard Skeie Wiencke. Two years later, they released their awesome debut single ‘Angst’ which would introduce the world to their rapid fire riffs and pop punk sound that would impress the label Propeller Recordings enough to sign them during the summer of 2015 and put out subsequent singles ‘Shave My Head’ and ‘Kill Em With Kindness’.

With the rise in profile came the decision to change the spelling (but not pronunciation) of their name to the now familiar Sløtface before dropping their first EP ‘Sponge State’ om April of 2016 which included the two previous singles plus two original songs; ‘Get My Own’ and the title track which really showed a band coming into their own. Later that year, they would release another EP titled ‘Empire Records’ which was inspired by the cult classic film of the same name plus the music orientated movie High Fidelity.

Clearly bursting at the seams with ideas, it wouldn’t be long before Sløtface released their debut album and ‘Try Not To Freak Out’ was came just a year after ‘Sponge State’. Loaded full of feminist polemics put to truly catchy riffs, it’s an impressive first album which is packed full with the passion and optimism of youth. Fans especially loved the single ‘Nancy Drew’ which was accompanied by an incredible animated video created by Ida Neverdahl and Ola Olsen Lysgaard and has been streamed more than 10 million times on YouTube. ‘Try Not To Freak Out’ was both a critical and commercial success for the band who then followed up with numerous festival appearances, which really suited the albums summery feel.

This year, Sløtface continued their impressive rise by releasing their follow up record ‘Sorry For The Late Reply’ on the last day of January. Clocked at just 32 minutes, they certainly don’t waste any time and have made a succeeded in once again crating a punchy record packed full of wit, killer hooks and a strong political narrative.

Their second LP opens with lead single ‘S.U.C.C.E.S.S.’, a wry take down on the pressures placed on immigrants to not only fit in with the values and norms of their newly adopted country but also to keep pushing to have an edge over others. Shea explains that this is based on personal experiences having moved to Norway from America, and it also has parallels with her career within the band.

“‘S.U.C.C.E.S.S.’ is an attempt at being tongue in cheek about how we’re always pushing ourselves to be harder, better, faster, stronger. I meld together these two lyrical ideas where I wanted to step out of the very heartfelt songs we were writing and try on this self-help mogul character, and also all these thoughts I was having about main themes of the album relating to family, growing up in another country from the one your parents grew up in (my parents are American and I grew up in Norway) and what it means to belong.” – Haley Shea

Other highlights include the emotionally charged ‘New Year, new me’, ‘Passport’ which is a gliding pop masterpiece questioning the value national identity and dark anthem ‘Sink of swim’ raising awareness of the ecological crisis, how politicians protect big business and the industrialists at the expense of the entire planet and the impending doom that is seemingly becoming inevitable.

“It’s about the desperation that comes when I think about climate change. It’s supposed to be an honest description of how I’m definitely not doing enough to stop it, and how it feels so massive and difficult, but at the same time it in part comes down to lots of small and every-day choices.” – Haley Shea

“Instead of showing icebergs melting and things that feel so far away, we felt that it made sense to make this about something we all live every day: Trash. BUT! This video is not a stab towards people not sorting out their garbage in their homes. Most of it comes from companies and governments.” – Lasse Lokøy

Sløtface will be arriving in the UK next month to promote record ‘Sorry For The Late Reply’ with a tour and you can book tickets with Gigantic right now!