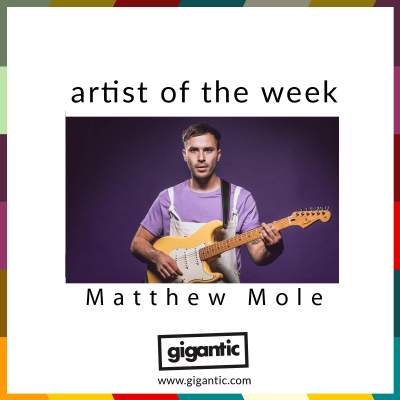 Combining an upbeat folk feel with pop and indie rock; Matthew Mole is the fresh new sound sweeping the globe.

The South African songwriter is a huge hit having been the first artist to hit No. 1 with a debut album in the charts in his home country with awesome record ‘The Home We Built’. It gave Mole a foothold in the international consciousness sending second album ‘Run’ to the top of the iTunes charts.

Mole has already racked up some impressive stats, having amassed 31 million streams on Spotify and 20 million YouTube views. He has now released his fantastic ‘Ghost’ album which he tours later in the year.

“The songs on this album represent fighting, and overcoming, difficult situations in life. Situations that are welcomed by the fear that we let in. The "ghost" represents those fears. Something that is there to intimidate you when you feel most vulnerable, but ultimately has no power over you because these fears are all in your mind. The purple colour scheme represents the overcoming of these fears.”

Mole returned with his exciting new album ‘Ghost’ last year which saw him developed his style to embrace elements of electronica to expand the sound, leading to the biggest and album of his career so far. Recorded in sessions held in both Cape Town, Johannesburg and London over the course of the year, it includes the singles ‘Let Me’, ‘Back To You’, ‘At The Corner’ and ‘Keep It Together’.

“While the new album contains the usual traits. I have experimented with electronics a lot more and I’ve introduced a bit of a ‘bigger’ sound in terms of instrumentation.”

Though greater in scope, the songs contained are deeply personal with themes of struggle and overcoming a running constant throughout his latest LP.

“The songs on this album represent fighting difficult situations in life. A lot of the difficulty comes down to fear or insecurity. The ghost represents those insecurities. It is something that intimidates us when we feel most vulnerable, but which ultimately has no power over us because we know that things will get better.”