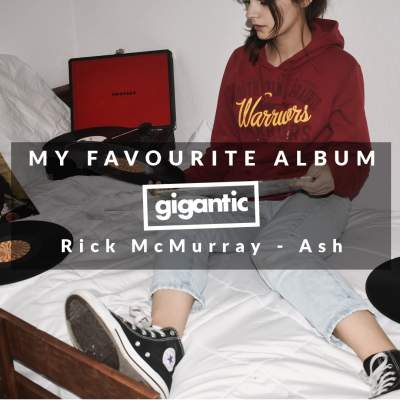 Gigantic is passionate about music and we continue to reach out to those who share our excitement with the My Favourite Album blog. This time round, we are honoured to have a contribution from Rick McMurray – drummer from indie icons Ash.

Northern Irish trio Rick McMurray, Tim Wheeler (guitarist\singer) and Mark Hamilton formed Ash as teenagers and quickly shot to fame in the mid-90’s with the release of the ‘Trailer’ mini-album which hinted at the great promise that would be released on their first full-length record ‘1977’ which is packed full of such career defining anthems as ‘Goldfinger’, ‘Kung Fu’, ‘Oh Yeah’ and ‘Girl From Mars’. Two years later, they would be joined by Charlotte Hatherley who would first appear on the single ‘Life Less Ordinary’ and then garage punk enthused album ‘Nu-Clear Sounds’.

The turn of the century saw their rise continue, first with the release of hit laden No. 1 album ‘Free All Angels’ which included the mighty hit singles ‘Burn Baby Burn’, ‘There’s A Star’ and Ivor Novello Award-winning single ‘Shining Light’. It would be followed by the ‘Meltdown’ LP which saw them explore a harder edge and then ‘Twilight Of The Innocents’ which took a more sober, introspective tone and was their first record following the departure of Hatherley.

Realising that the internet had forever changed the way we listen to music, Ash experimented with forgoing the traditional album format with their ‘A – Z Series’ – a daring creative bid which saw them release a single every two weeks for a year. In 2015, they returned to recording full length records and released the energetic ‘Kablammo!’ and their latest classic LP ‘Islands’.

Don’t miss Ash revisit one of their best ever gigs – Live at Akasaka Blitz, Tokyo 2001. The Livestream takes of this blistering performance takes place this Friday (19/06) from 19:00-20:00. Full details can be found HERE.

Plus, Ash have announced their ‘Teenage Wildlife: 25 Years Of Ash’ tour which sees them tear round the UK, celebrating their incredible career by playing all the hits. Tickets on sale with Gigantic HERE.

1993, the year I turned 18. Didn’t really connect it with that at the time but in retrospect it’s a real coming of age album for me. A lot of it really resonated with my teenage self. It was like finding an album at the end of my teenage years that I felt I could really relate to.

I heard ‘Human Behaviour’ on TV first; pretty sure it was on The Chart Show and the song and video blew my mind. I’d not heard anything like it and the lyrical content felt like something I’d been waiting to hear for all my high school years. I definitely related to that sort of outsider persona she was projecting, or at least, I projected on to her. It felt like it gave expression to the latent feeling alienation form my peers.

It felt like when I heard the full record it opened me up so much musically. Half the album is so club oriented which was a genre I’d totally dismissed up to that point but Björk took its formula and injected some proper song writing into it. It had depth; she made that genre have something to say, at least to me. And I discovered that if it had something to say, I actually really liked it. Which is pretty mind-blowing to a kid who was listening to metal music just a few years before. Obviously Nirvana had happened at this point, and had shown us all that guitar music had something to say on a personal level but I think Björk’s breadth of emotion really resonated in a different way.

There’s also the other side of the record, hints of jazz. I love how playful it is stylistically, and just the right amount of quirkiness. It never feels like its trying too hard.

All of ‘Human Behaviour’ obviously, ‘Violently Happy’, ‘The Anchor Song’, ‘Play Dead’, which I think wasn’t even on the track listing on the cassette I had. Maybe a last-minute addition to the album.

Just that seeing Björk and PJ Harvey doing 'Satisfaction' on the Brits was one of the coolest things ever.