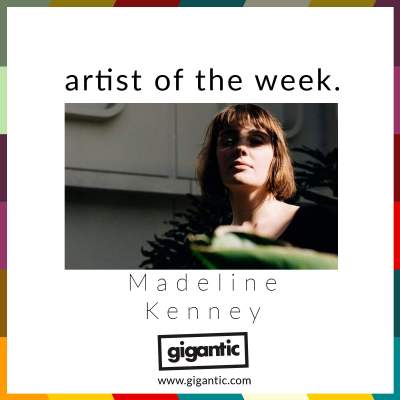 Madeline Kenney adapts woozy dream pop with angular guitar parts and inventive instrumentation to create unexpected songs which set her apart, placing her well away from any sort of movement and having little in the way of contemporaries.

Last year, Kenney released her debut album 'Night Night At The First Landing' on Company Records which was soon seized upon by critics who were drawn to the originality and innovative style exhibited across the ten tracks. Patient and emotively charged, her first LP displayed intricate guitar riffs interwoven with dynamic yet delicate vocals to create a complexed musical texture which feels somewhat strange and alien, making it all the more interesting.

Ever the hard worker, Kenney hit a studio in the woods of Durham, North Carolina only five months after her first full length released to return with her second album ‘Perfect Shapes’ just over a year later. Retaining her bold experimental approach and nuanced song writing style, her unique sound continues to develop and ‘Perfect Shapes’ is a confident record which reflects upon her position as a female musician refusing to fit in with the assumptions that come from being in that role and what effects the differing relationships in her life have upon her.

"I realized I'm dealing with a lot of stuff in regards to my relationship, certainly dealing a lot of stuff with expectations of myself as a woman in the music industry and expected to be cool, young, beautiful and accessible, and not too challenging. I think all of those things kind of run through a lot of the songs. So, there's a loose theme, but I'm not trying to make a political statement. I'm just working through my own psychological shit."

‘Cut Me Off’ was the first single to be taken from ‘Perfect Shapes’. Built upon layering guitar parts with a loop sampler, the song washes over the listener only to be abruptly ended despite Kenney’s plea not to be cut off. Second single ‘Overheard’ is a sombre look at the difficulty of balancing your individual identity as a mother with the pressures of societal expectation which was followed by ‘Bad Idea’, which Kenney realised in hindsight was detailing the demise of her current relationship at the time of writing.

"I was in a relationship that I knew was going to end, but I don't think that I was admitting it to myself. I wrote that song far before that relationship ended. And then going back and listening to that – 'That's what I was trying to say to myself.'”

Madeline Kenney head to our shores to promote ‘Perfect Shapes’, playing gigs at Brighton and London next month.