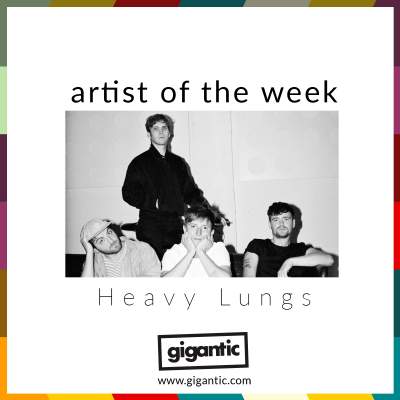 The best bands are those that are able to somehow link the need for wild abandon on stage with something of real substance behind the music. Fortunately, Heavy Lungs are the perfect marriage of intelligent lyrics and guttural live performance. The four-piece includes drummer George Garratt, guitarist Oliver Southgate, with Danny Nedelko on vocals plus James Minchall playing bass and are widely pointed to as THE act to explode in 2019.

“If we were a TV show, I reckon we’d be ‘Frasier’. Because we’re classy as hell but have moments of chaos and emotional turmoil. Musically, I think we like to stay lean but with firm handshake.” – Oliver Southgate

Last year was a busy twelve months for the boys from Bristol which saw them gigging heavily, benefitting from a prominent support slot with their good mates IDLES who were promoting BRIT Award winning second album ‘Joy As An Act Of Resistance’, in support of their five-track debut EP ‘Abstract Thought’. Proving to be a lacerating listen with muscled bass lines and raucous guitar riffs, their first studio output went down well with critics, described by Omar Tanti of Loud And Quiet as “spiky, combative”, with Not Another Music Blog drawn by the “raw passion and heat worthy of any serious punk outfit.”

‘Abstract Thought’ featured the single ‘Stutter’, which initial side steps between haphazard guitars and an almost exhausted vocal before plunging into frenzied race to the end which, as the band explains; “Lyrically, it’s about the inherent feeling of detachment and the inability of committing to anything due to fear of failure.”

They also released their accomplished single ‘Blood Brother’ in 2018 which was perhaps the first indication of the radio friendly potential of the band, softening the sharper edges they had previously exhibited for a more polished sound. The physical format came as a split 7” with gig buddies IDLES via the label Partisan who paired it with their pro-immigration anthem ‘Danny Nedelko’ which was inspired by Joe Talbot’s love for the Heavy Lungs singer.

Heavy Lungs have kicked off 2019 by dropping their new single ‘Jealous’. A frustrated examination of how the deadly sin isolates you from even you closest love by creating an all-consuming black hole within that sucks away any potential for satisfaction, unable to enjoy whatever you do have.

The release of ‘Jealous’ also sees the band heading out on an early tour this month where you can see their visceral live performance for yourself. Plus, they join the mighty line up of Handmade 2019 which takes place around the fine venues of Leicester on Sunday 5th of May and is known for its expert curation of the line-up and selecting only the most vital acts to reveal the musical character of the year that lies ahead.