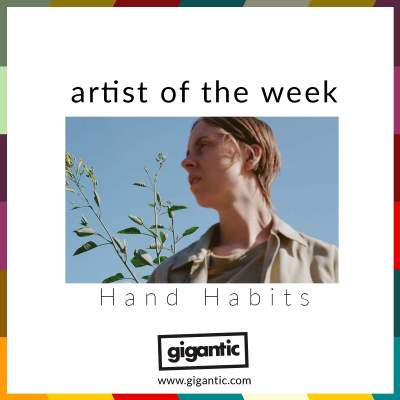 Hand Habits is the stage name of prodigious guitarist Meg Duffy. Having previously been a member of Kevin Morby Band plus Mega Bog, Duffy is now stepping into the limelight and finding devoted audiences and plaudits from the music press all around the world.

When she isn’t working on her own material or as part of someone else’s band, Duffy is being recruited as a session player by the likes of Weyes Blood, William Tyler and The War On Drugs playing slide guitar on the track ‘Holding On’ which appears on their Grammy Award-winning album ‘A Deeper Understanding’ showing the sheer calibre of her talent.

‘Book On How To Change’

Though originally from New York, Meg Duffy would eventually move to the summery climes of Los Angeles to join Texan folk rocker Kevin Morby’s band whilst also playing for lofi Seattle based multi-instrumentalist Mega Bog aka Erin Birgy. Having previously attended Schenectady County Community College to study guitar performance, playing regularly in front of live audiences gave her the experience necessary to improve the skills they had learnt in the classroom and the confidence to begin pursuing her own direction.

Duffy first began writing in private before giving herself the stage name Hand Habits. She soon released her first single ‘Small Shifts’ which came out in 2014. The delicate song gently vibrates and warbles underneath effortlessly executed lead guitar and charming vocals. It was partnered with the b-side ‘Bloom’, a nine-and-a-half-minute epic which starts off as a folky number played whilst sheltered from the pouring rain growing to become an expansive soundscape taking on the roaring elements more commonly associated with post rock. The ambition and abundant talent exhibited on the two tracks was enough to attract critical acclaim from far and wide.

Duffy released her debut album ‘Wildly Idle (Humble Before The Void’ on independent label Woodsist Records, based in her native New York city, in 2017. Written, recorded and self-produced at her own custom-built home studio, she was able to work spontaneously and pursue whatever direction her whims took her. The result was a lush yet intimate record which embraces the experimental potential of indie folk rock, including poems attacking gender norms and bright songs of exploration which reflected the excitement of discovery which came from her recent relocation.

“Being in LA in general was inspiring because it was so so new to me, being an East Coaster. All that sun all the time felt so good (even if I was indoors a lot). My housemate at the time and dear friend, Robbie Simon, lived below me in the basement room and the only thing separating us was a thin floor and an air duct that was basically like a tin can telephone to each other. He designed the record artwork and layout. He has great musical and visual tastes that were always floating up through the floor. Making the record motivated itself.”

This month has seen the release of the follow up LP ‘placeholder’. This time round, Duffy chose to enter the studio and work with a hand-picked selection of collaborators to create a second offering which feels somewhat more confident than the last, a theme consistent with the inspiration behind the songs; "A big aspect of my songwriting and the way I move through the world depends on my relationships with people. The songs on ‘placeholder’ are about accountability and forgiveness. These are all real stories. I don't fictionalize much."

The sophomore album kicks off with the title track which Duffy explains is about the sense of being an imposter, and the unique perspective feeling like you’re not quite meant to be there brings; "If you've ever held someone's seat in a theater, if you've been a bench warmer, if you've ever placed a reserved sign on top of a tablecloth, if you've been an 'extra' or a 'stand in' for something, you've experienced what being a placeholder feels like to some extent. You observe"

‘placeholder’ also includes the brooding single ‘can’t calm down’ which reflects on how the peace of mind of youth is lost to be replaced by adulthood anxiety. The highlight song certainly shows how Duffy’s song writing and recording has benefitted from entering the studio which also shows right across all of the twelve tracks.

It’s not often that Duffy plays in the UK so we at Gigantic are very excited to announce that we have tickets for her special headline show at the relatively intimate setting of The Lexington in London taking place on Wednesday 8th of May. Plus, Hand Habits will be appearing at The Great Escape Festival which hits Brighton the following weekend – an exceptional selection adding to the impeccable line up.