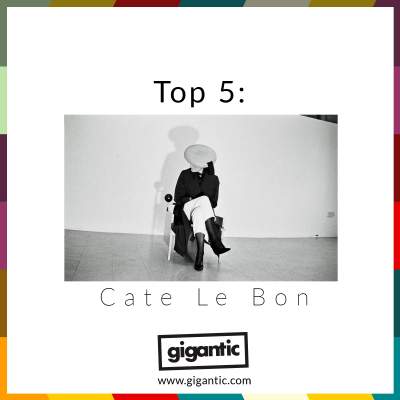 This week has seen the release of the single ‘Daylight Matters’. The resplendent song will appear on her upcoming record ‘Reward’ which is scheduled for release on Friday 24th of May through the label Mexican Summer on CD, MP3 and limited-edition vinyl complete with a signed print.

To celebrate the release of her brand-new single and with her tour fast approaching, Gigantic brings you the essential list of the Top 5 tracks either starring Cate Le Bon or including her contribution. Get your Cate Le Bon tickets HERE.

Perhaps her best-known song, ‘Are You With Me Now?’ is the spell-binding single which exemplifies Le Bon’s ability to craft understated neo-folk perfection.

‘Are You With Me Now?’ appears on Le Bon’s third LP ‘Mug Museum’ which was recorded in LA having just moved there and produced by Noah Georgeson (Joanna Newsom, Devendra Banhart, Josiah Steinbrick). Inspiration for the album’s title came from a former flatmates nickname from the many teacups littering her room and is eluded to in the promotional video for the single.

Having previously collaborated with Californian neo-psychedelist Tim Presley, Le Bon began to pursue her interest in unconventional song writing style even further and introduce elements of this into her own work as shown on the LP ‘Crab Day’.

Her fourth album includes the single ‘Love Is Not Love’ which perfectly exhibits her ability to fuse an avantgarde approach to folk sensibilities to create her own very idiosyncratic sound.

‘I Just Wanna Be Good’ is the endearing closing track to Le Bon’s 2017 four track EP ‘Rock Pool’ which was her latest material until the release of the new single ‘Daylight Matters’.

It marked an especially prolific time for the rising star, as she also released an improvised live album with her side project band BANANA which includes members of Red Hot Chili Peppers and Warpaint plus the DRINKS LP with Tim Presley.

Not only is Le Bon an excellent multi-instrumentalist, singer and songwriter, but she’s also a very proficient producer too as proved on her re-working of Eleanor Friedberger’s ‘Are We Good?’.

The original track an be found on Friedberger’s album ‘Rebound’ which explores her experiences leaving America following the election of Trump for Greece to explore her ancestral heritage, released last year.