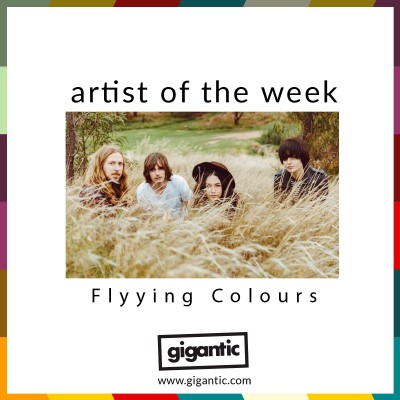 Residing on the legendary label Club AC30, a home for the most innovative acts and always a sure sign of quality, Flyying Colours have now returned with Fantasy Country – their first album release in five years which has reawakened the band’s passion with fans and critics calling it their best work.

Taking Fantasy Country on tour, Flyying Colours will be heading to the UK during Spring 2022 to play just a handful of select dates on sale with Gigantic right now! Don’t miss out and click HERE to grab your tickets!

Schoolfriends Brodie J Brümmer and Gemma O’Connor formed Brunswick based band Flyying Colours in 2011, and immediately set about establishing themselves on the Melbourne gig scene by playing wherever and whenever they could. First single “Wavygravy” was soon followed by an eponymously tired debut EP in 2013, both of which proved the arrival of something truly special which began to gain traction throughout the rest of Australia and beyond.

Touring with such prestigious names as pinkshinyultrablast as well as Johnny Marr, Brian Jonestown Massacre and A Place To Bury Strangers; the band developed both the talent and the audience appetite for the release of album Mindfullness which more than met expectations when it dropped in September of 2016. The enormous international reaction to a record which wrapped gorgeous melodies and harmonious vocals inside indie, shoegaze, and psyche prompted a huge rise in profile and established them as one of the coolest cult bands of the current generation.

Despite riding high from their instant success, fans had to wait five long years for another full-length record – but Fantasy Country once again proved why Flyying Colours are so special. Featuring the singles “Ok” and “Big Mess”, their second album is gloriously radiant and is a culmination of all of their experiences travelling and playing all around the world.

“This album was supposed to now be 6-12 months old. We take touring and supporting our music live pretty seriously so it would have been very difficult for us to put out this album during the early stages of the pandemic. We are very lucky to be in Australia right now where shows are starting up again, and we of course hope to be touring internationally again soon” – Brümmer.

Fortunately, the time to tour will soon be at hand as Flyying Colours have now announced select shows in support of their essential Fantasy Country album. Tickets are on sale with Gigantic and selling fast!

Flyying Colours tickets are on sale with Gigantic HERE.