AOTW // All Them Witches 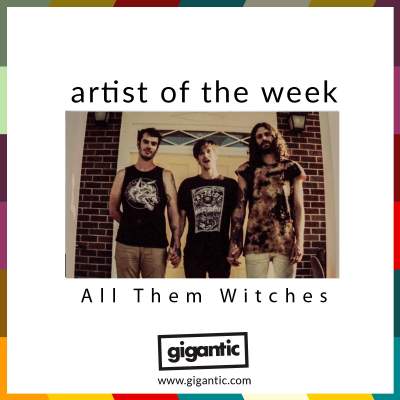 Dark and beguiling; Nashville three-piece All Them Witches blend blues rock with garage, psyche and stoner rock to create hypnotic songs with a truly intense feel. Their immense creativity has resulted in a truly prolific output, with each new record eagerly awaited by their devoted international fanbase.

Now, with the release of their sixth album ‘Nothing as the Ideal’ which critics and fans agree is their best yet; All Them Witches announce headline dates to showcase their new material. Grab you tickets with Gigantic!

Formed in 2012, All Them Witches immediately showed immense creative strength with their prolific output resulting in the self- release of their first full length record ‘Our Mother Electricity’ in the same year. Inspired by the heavy sound of Black Sabbath but also their willingness to experiment, they achieved cult status throughout the US and reached listeners in Europe and around the globe.

Their innovation continued with the ‘Extra Pleasant’ EP which saw them record using only two microphones plugged directly into a cassette recorder, creating an almost mythic quality to their song writing which appealed to fans. The ensuing years would see an inexhaustible flurry of creative energy with a constant release of albums, including ‘Lightening At The Door’ (2014), ‘Dying Surfer Meets His Maker’ (2015), ‘Sleeping Through The War’ (2017) and ‘ATW’ (2018).

Sensing that their next album would be something truly special, the Tennessee troupe relocated to London to record in Studio 2 of the iconic Abbey Road. Enlisting the aid of their long-term friend Mikey Allread as mixing engineer once again, they set about creating new album ‘Nothing as the Ideal’.

“As soon as we walked in, all of that touristy stuff is just gone. It is a funky, vintage, dirty studio, just bad-ass and super-awesome. The staff there was such a joy to work with, and the room we were in was Studio Two, which was The Beatles’ room.” – Ben McLeod

Some of the magic of the studio which helped craft some of the greatest rock and roll records of all time must have seeped into the band as album ‘Nothing as the Ideal’ is their best yet. The mystical element of their music is taken even further with complicated song structures explored to their fullest extent and delicately balanced melodies are fused with hard rocking riffs to produce one of the most compelling records of the year.

Make sure you see All Them Witches when they return to the UK to play the new material from ‘Nothing as the Ideal’ plus tracks from right across their mighty career at headline dates during September 2021 – tickets on sale with Gigantic right now!

All Them Witches tickets are currently available.

All Them Witches Tickets