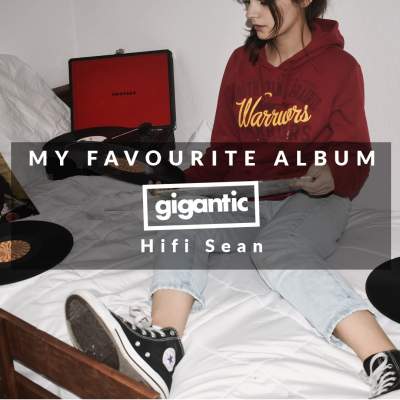 Sean Dickson was at the forefront of the baggy movement with legendry indie pioneers The Soup Dragons from the mid-80’s and into the following decade. Now, he’s gone solo and started producing electronica tracks and big beats with a funk and psyche edge as Hifi Sean who joins us for a very special edition of My Favourite Album!

Following on from the extremely successful experimental marriage of two immense talents, Hifi Sean has now officially teamed up with renowned singer David McAlmont to form McHifi. Known for his beautiful dulcet tones which elevates the listener to the heavens, McAlmont fuses his voice with Sean’s sonic adventurism for a fresh psychedelic soul escapade that is exciting their newfound followers and long term fans alike.

Check out their single ‘Bunker To Bunker’, which is the first track to be released from their upcoming album expected to be released later this year!

This album was a game changer for me, an album that literally made me start to realise how sound was capable of being mutilated and turned into different sonic structures and how FX really added to the whole process of creating dramas and moods.

My older brother had this album and I discovered it and literally stole it to my bedroom and wore it out , I think many years after it came out the exact time I heard it first I can’t remember but still was something that fascinated me endlessly every time I hear it even till today.

It was the evil twin of Human League’s multi-million selling ‘DARE’ album and was basically producer extraordinaire Martin Rushent’s remix album of that album, or dub album or whatever you want to call it but for a young teenager like me I did not care about the semantics it just sounded like music from outer space and from that point on I was completely obsessed with Rushent.

To this day it still sounds like the future and how many records still do that for you?

He was my producer hero the man that I went ok I want to be like him one day and I still think like that to this day. In fact before he passed away in 2011 I spoke to him a few times about wanting to work with him which he casually seemed interested in or was just being super nice as he always was such a gentleman to talk to.

I still think Prince was influenced by his Linn Drum programming and his production techniques. I mean listen to ‘Purple Rain’ album period Prince and you can hear so many of Rushent’s beats and sounds and FX on it.

When I was 14, I managed to convince my parents to get me a Roland SH101 for my birthday to which I still have and still use on records.

In my teenage bedroom I had a double cassette recorder deck the Roland synth and a friends borrowed TR808 drum machine and I would sit for hours recreating the drum beats and drum fills and believe me I know every single drum fill on this album inside out.

I would do my own ‘dubs’ by recording parts on one cassette dub it over to the other one on the double deck and recorded little repeat sections mimicking his cut up delay fx.

I made a little teenage cassette album which I still have I called ‘Silent Industry’ which has 12 tracks and is basically a homage to the genius of this album.

I should make that available to hear as its so naive but likely would seem like some lo-fi synth-wave classic now instead of obsessed teenager making synth music quietly whilst his parents would thump on the living room ceiling telling him to shut up.

And then I discovered punk rock indie and guitars and it all kinda fell to the way side for a while but these days I know deep in my heart what I do now as a DJ, a songwriter and a producer has a little bit of what Martin Rushent taught me as that kid in my heart.