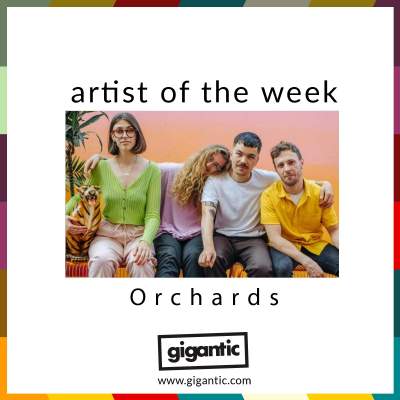 Delightful yet poignant, the music of Brighton band Orchards is rooted in math rock but embraces a bright alt pop shine that electrifies their live shows as their frenzied fans dance to their powerful messages.

Following the release of their lauded first album ‘Lovecore’ earlier this year, Orchards announce a headline tour in support of their new material during Spring 2021 – tickets available through Gigantic.

"It's our statement, a flag in the ground letting people know we're here and this is exactly what we're all about. It's the product of years of touring, meeting new people, hard times, good times, loss, friendships and growth. We're starting a party, and everyone's invited." – Lucy Evers

By balancing impassioned lyrics, positive vibes and infections riffs, math rock fourpiece Orchards were the new stars on the scene to quickly to create their own buzz, with their name often cropping up in the music press eventually leading to getting gigs in the US playing for DIY magazine before their storming set at SWSX in 2019.

Eagerly awaited, the Brighton based quartet dropped their debut album ‘Lovecore’ Daring to really show their vulnerable side, the songs explore themes of loss, heartache, depression and sexism through raw and honest vocals that earnestly burst with passion. Songs like ‘Girlfriend’ and ‘Social Sobriety’ inhabit dark and brooding corners to reflect the seriousness of these subject matters, whereas other tracks like ‘Sincerely Overwhelmed’, ‘Give Me’ and ‘Stealing Your Sleep’ prefer to explore the ideas with a bright sense of optimism and hope.

Speaking to Dork, Lucy outlined just how personal the first full length record was to them; “I mean, not to get emotional but it's been a lifetime in the making for all of us. It's the first album any of us have ever released throughout all of our musical endeavours. So, yeah it's been three years in the making but a lifetime really for us all. We're super proud of what we've created.”

Catch your new favourite alt pop band Orchards when they kick off the tour for first album ‘Lovecore’ in March – Orchard tickets are on sale with Gigantic right now!