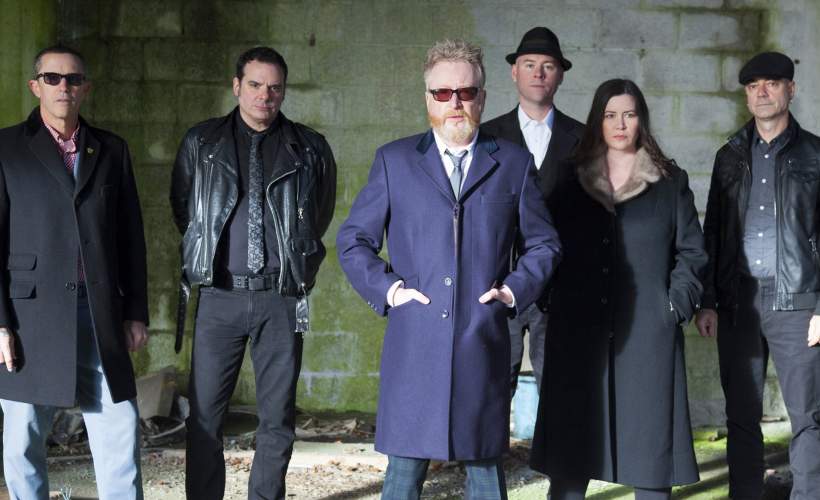 Tweet
Irish American band Flogging Molly are the rowdy good time you need in your life.

Excitement is quickly building and many people are looking to get their hands on Flogging Molly tickets. With demand so high, we recommend you book early or risk missing out. Fortunately, placing your gig ticket order is made easy as you can access Gigantic 24/7 using your computer, smartphone or tablet whilst relaxing at home or busy on the move.

The social and political awareness that drives Flogging Molly’s music is never more prominent than in their upcoming new release LIFE IS GOOD - a strikingly powerful album and it arrives at a strikingly key time. The sixth studio album by the renowned Celtic-punk rockers now in their 20th year is mature, well crafted, equally polished and almost aggressively topical. It is filled with rousing songs that are timeless in their sentiment, but directly related to today’s most pressing concerns: Politics, the economy, unemployment, planned boomtowns gone bust, immigration policies gone awry, and much more.

For singer and lyricist Dave King, it may be the lyrical couplet contained within the surging “Reptiles (We Woke Up”) that points toward the album’s central theme. “We woke up,” sings King, “And we won’t fall back asleep.”

“The thing is, there are things changing,” says King. “That’s why I wrote that line, ‘Like reptiles, we'll all soon be dust someday.’ It’s quite scary, especially for somebody who has children these days--bringing up family in this environment of who’s welcome and who’s not welcome. I'm talking about the cultures in America and the UK--especially American immigration.

Life Is Good thus serves as a wake-up call to those who have simply stood by while far-reaching political decisions were made that had serious impact on them. And, significantly, it also serves as notice that the time for action is now.

And people are indeed taking action, adds King, which is a crucial point.

“I think especially with things like government--I think we all tend to fall asleep a little bit when it comes to other people that are making decisions for you. I think we should be the ones influencing the government to make these decisions. It’s a great thing that we’re now taking to the streets again. And it’s a positive thing.”

Imagery abounds on Life Is Good, and one of the most memorable images might be found in “Adamstown,” the saga of a planned community west of Dublin that came to a halt in mid-construction a decade ago when the Irish economy crashed--and left little more than a ghost town in its place.

“It had a huge negative connotation to it,” King says of the eerie, unfinished settlement. “But now it’s starting to turn again, people are starting to move there, businesses are starting to open, and there is hope.”

Thematically, hope and inspiration are a major part of “The Hand of John L. Sullivan,” a rollicking track about the legendary “Boston Strong Boy” who was the first ever heavyweight champion of gloved boxing from 1882-1892. Sullivan was a hero to many, and his story has a cultural significance that fits squarely within the story Flogging Molly want to tell with Life Is Good.

“He came from an immigrant family to Boston, and they brought their family over to try to make the best possible world for them,” says King. “We live in an environment right now where that doesn’t seem to be what should be allowed to happen, you know?

Recorded in Ireland and produced by multiple Grammy Award winner Joe Chiccarelli (U2, the White Stripes, Beck), Life Is Good is by any measure a formidable return from Flogging Molly, an assessment with which Dave King fully agrees.

“It’s been a tough few years for a lot of us in the band. Dennis (Casey, guitarist) lost his dad, I lost my mother, and there have been certain issues, pertaining to sentiment, in a lot of the songs. But we just try to do the best we can. We’ve always had fun getting together and coming up with the new songs, and it's still that way.

Here we see what’s uniquely distinctive about Life is Good, as the gravity and weight of these themes never overshadow the sheer fun and exuberance felt in each song. For the message is delivered and built on the backs of boisterous and barreling live touring.

“We're known for our live shows,” says Dave King. Writing albums has always been a vehicle for us -- it's been a means to get people onto the dance floor. And that's kind of the way we’ve always approached it, no matter what.”

“The one thing we are is a positive band,” adds Dave King. “When people come and see our shows, it’s a celebration--of life, of the good and of the bad. And we have to take the good and the bad for it to be a life.”

Flogging Molly formed in 1997 after years of playing around the Irish clubs of L.A. They quickly became a success finding audiences worldwide for their debut album Swagger which has grown with subsequent titles Drunken Lullabies, Within A Mile Of Home, Float and Speed Of Darkness. Their latest LP is titled Life Is Good released on their very own label Borstal Beat Records.

“Life Is Good is a cogent evolution in Flogging Molly's trademark Celtic folk sound and a welcome gift from a band celebrating their 20th anniversary this year.” - Sputnikmusic

The excitement is red hot and we expect Flogging Molly concert tickets to sell very fast. Plus, with only limited amounts being put on sale by the event organisers, you will have to act quickly and place your booking before they all go. If you have any questions, then contact our dedicated customer service team who can assist with every question when selecting from our huge range of essential gig tickets. Remember, award winning ticket vendor Gigantic is the very best place to come to make a stress-free booking before enjoying your big night out.