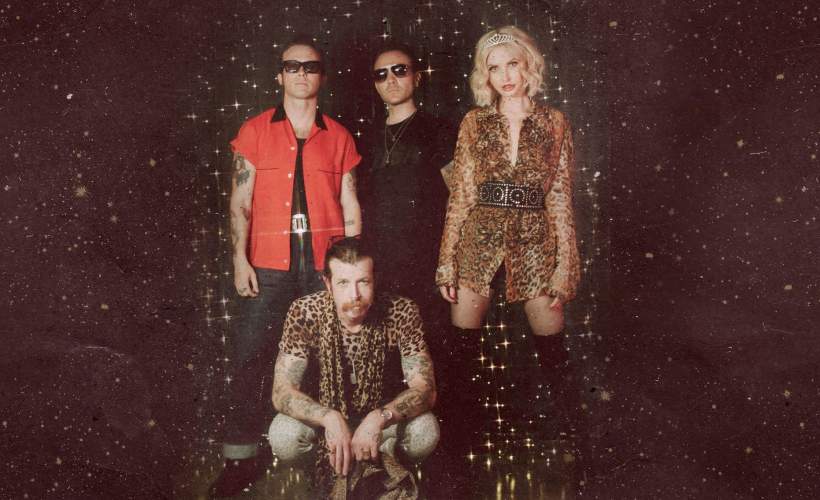 Tweet
Eagles Of Death Metal were originally conceived by Jesse “The Devil” Hughes and Queens Of The Stone Age front Josh Homme.

If you’re not already familiar with this eclectic duo, you would instinctively think thrashing guitars, guttural vocals and pounding relentless drums. You couldn’t be further from the truth. Eagles of Death Metal specialise in garage rock fused with a Rolling Stones style that embeds them firmly in the rock and blues category, rather than the limited field of death metal.

See them when they tear it up at Electric Ballroom in London on Wednesday 12th of June 2019.

We are as excited as the fans to be able to offer Eagles of Death Metal tickets, but as the demand keeps growing you will need to act fast and book yours as early as possible to avoid being left disappointed. Fortunately, making your booking is easy as you can select through our huge array of gig tickets at home or on the go whilst using your tablet, smartphone or computer 24/7 at home or on the go.


Hailing from California, the Eagles of Death Metal are a side-project that has grown into a headliner band in its own right. Four solid albums are the result, the 2004 debut ‘Peace Love Death Metal’, 2006’s ‘Death by Sexy’, the 2008 release ‘Heart On’ and their latest record Zipper Down which came out in 2015. While they may not be prolific when it comes to studio releases, the band are busy on the touring circuit, building up a solid following in their native US. And it’s not simply a matter of transposing QotSA fans over to the Eagles of Death Metal either, although inevitably there is a considerable amount of crossover between the two. Instead, the Eagles have developed their own unique fan base, and a distinctive sound.

The Eagles of Death Metal fall into the indie rock category, and have earned a place supporting bands such as the Strokes, the Distillers and Placebo. Now they’re touring on their own as a headline act, and at Gigantic we have Eagles of Death tickets on offer for all their UK gigs. But make sure you act fast and grab them while you can!

Eagles Of Death Metal will begin its 24thAnniversary Tour with a series of shows in the United Kingdom, beginning Nov. 22 at Chalk in Brighton and highlighted by an evening at the Roundhouse in London on Dec. 2.Bones UK will support on all dates.The 12-date, two-week leg of the tour will hitsuch cities as Birmingham, Manchester, Leeds, Dublin, Belfast and Glasgow, among others, and is the first of what is expectedto be a multi-year trek that will take the band throughEurope, Australia, New Zealand, Southeast Asia,and the United States andCanada.General on salefor all U.K. showswill be Friday, May 21, while O2 shows will begin pre-sales on May 19.Known for their high-energy, effortless charisma and infectious feel-good vibes, EODM will be returning to the U.K. for the first time in over two years.
“Having been stuck in and around the house for over a year has had me pacing like a caged animal,” said lead singer and frontman Jesse Hughes. “I cannot wait to let loose and get back out on stage todo my thing for all the lovely people around the world. Rock ‘nRoll is meant to be shared, and I can only shake my d**k around the houseand perform for my cat for so long before she starts flat-out ignoring me.” The EODM live band is filled out by Jennie Vee on bass, Jorma Vik on drums, and Joshua Jove on guitar. Formed in 1998 in Palm Desert, California by best friends Jesse Hughes and Joshua Homme, Eagles Of Death Metal is nota death metal band. The story goes that a friend was introducing Homme to the death metal genre, and Homme wondered what a cross between the Eagles and a death metal band would sound like. With that, EODM was born. The band released Peace Love Death Metalin 2004, followed by Death by Sexy in 2006, Heart Onin 2008, Zipper Down in 2015and Eagles Of Death Metal Presents Boots Electric Performing The Best Songs We Never Wrotein 2019.

Related to Eagles of Death Metal