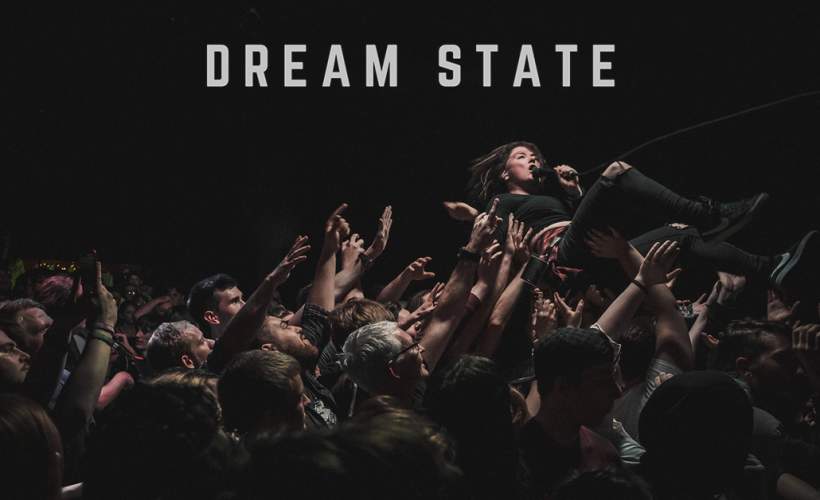 For the last few months, a song has been bouncing from playlist to playlist around the world, an old-school victory of word-of-mouth recommendations taken flight in the age of streaming. Equal parts beauty and brutality, White Lies has so far racked up over a million plays on Spotify and well over 5 million on YouTube, but for South Wales’ Dream State, comprising vocalist CJ Gilpin, guitarists Aled Evans and Rhys Wilcox, bassist Danny Rayer and drummer Jamie Lee, it’s only the beginning.

Gigantic is the best place to get your Dream State tickets. Offering a huge selection which you can choose from 24/7 using your smartphone, computer or tablet, we offer a stress-free service which you can rely on.

Live music has never been more popular, so you need to be ready for the release of tickets for your favourite act. Set a personal reminder with Gigantic which will alert you with a text message or an email just prior to the release of Dream State gig tickets at 10:00 on Friday 4th of November.

Formed in late 2014 in South Wales, Dream State signed to UNFD a few hours before playing Reading Festival for the first time in 2017. In the interim they developed a fierce following around the UK and beyond; 2015’s sharp EP Consequences hinted at what they were capable of but when White Lies landed (recorded in summer 2016 with Jonny Renshaw) it showed what the band were really capable of.

“It’s about temptation, denial, hitting rock bottom and surrendering to yourself,” explains CJ. “There’s a line in the song - ‘Why won’t you give up?’ - that is really personal to me because I’m questioning myself as well someone close to me. I had to watch a person I love destroy themselves slowly over time and that line is for the both of us.”

Now backed with new acoustic and piano versions of the original track (recorded with Grumble Bee’s Jack Bennett), the light and shade afforded by these new renditions demonstrates the band’s musicality and creativity, as well as the sheer power of CJ’s voice.

“White Lies is a naturally bold and aggressive song, so revisiting the track from a more delicate angle initially felt like we were moving against the grain,” says CJ. “Once we stripped things back, the more vulnerable elements started to shine through and guide us forward in the process! It brought about another dimension to the sound which was really interesting to explore and develop

There are only limited amounts of Dream State concert tickets being put on sale by promoters which means you are going to have to act fast and ensure you get yours before they all are taken.

Award-winners Gigantic allow you to choose from an ever-growing range of the most essential gig tickets with the benefits of a skilled customer service team ready to help with your every enquiry. Our passion for music shines through and reflects in your experiences, so you know we are the best place to come whenever you are booking for your big night out.

Found the venue with some trouble but when we got there it was fine. The band played fantasticly well, felt like a really special night. The crowd and musicians very quickly built a strong rapport and most people got emotional during certain songs. I did have trouble seeing the band though, as I am very short and the stage didn't seem rerribly elevated- not surprising for such a low ceiling. Overall, I loved it and definitely go again!

This band are so talented and brilliant performers! Was right at the front for them, second time I have seen them and was thoroughly enjoyable, they really get involved with the audience and CJ is one hell of a singer. Will always see them when I can. The first support act Distant Blue were nothing special, they still seem to be undecided about how they want to sound and the singer just seemed to be annoyed we weren't jumping around singing along. Chapter and verse were really good, didn't like them on YouTube but they are actually pretty decent live. All in all it was a fantastic gig and a definite 5 star performance from Dream State

WHAT a gig. The band manage to make the smallest dingiest venue feel like a full on stadium. CJ is an incredibly vocalist and a beautiful human. Love them.

That's all we have for Dream State! Check out their upcoming shows