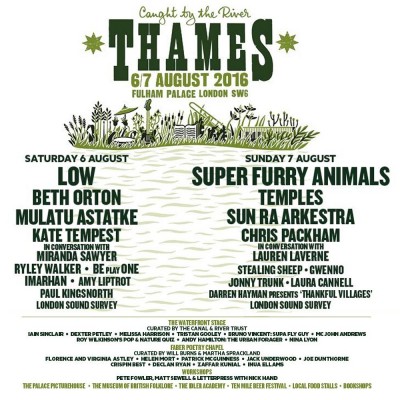 Caught by the River Thames Tickets

Caught by the River Thames Tickets


THE FABER POETRY CHAPEL
CURATED BY WILL BURNS & MARTHA SPRACKLAND

THE MUSEUM OF BRITISH FOLKLORE


On the northern banks of the Thames, right where the dirty old river begins to roll out of the city, sits Fulham Palace. It’s a best-kept secret in a city that’s not got many unturned stones left; a shortcut to verdant green space just west of the metropolis. An idle ten minutes walk from the tube, it’s somewhere that makes you feel like you’ve stumbled out of the city and into the countryside with the very minimum of effort. It’s the perfect place to host a festival.

This August, Caught by the River Thames will do just that. A remarkable new festival celebrating the very best in music, arts and the natural world, it promises to bring together a truly inspirational gathering of bands and brewers, authors and artists, thinkers and drinkers. Part gig, part literary gathering, part nature symposium, part high-summer garden party, Caught by the River Thames promises to the most diverse and inspirational festival line-up in the capital this summer.

Brought together by the people behind the much-loved website Caught by the River and visionary promoters Robomagic, the festival will bridge the previously un-spanned gap between mind-bending psychedelic rock’n’roll shows and Wildlife TV. Over two days, it will unearth archival London audio-history; provide poetry in the total serenity of a Victorian chapel; play host to jump-up party music from the four corners of the world and hold a low-impact, locally sourced Ten Mile Beer Festival.

Headlining the Lawn Stage on Saturday 6th are legendary Minnesota trio Low. Their masterful use of dynamics and ear for a striking harmony - never more beautifully captured than on last year’s ‘Ones and Sixes’ LP - make them one of the most captivating live acts on the planet. Topping the line-up on Sunday 7th are the peerless Super Furry Animals. Having returned to the live stage last year for a series of ecstatically received reunion shows, the band will be bring the very best of Wales to the banks of the Thames for this one-off London show.

Joining Low and the Super Furries will an array of artists from across the globe including: Beth Orton, Mulatu Astatke, the Sun Ra Arkestra, BE performing the London premiere of the album ONE, Laura Cannell, Ryley Walker, Darren Hayman (playing songs from his ‘Thankful Villages’ project), Gwenno and Jonny Trunk.

Across all the stages of the festival there will be talks and readings. Leading the speakers are Kate Tempest (in conversation with Miranda Sawyer and reading from her forthcoming debut novel) and one of the UK’s best-loved naturalists, Wildlife TV Presenter presenter Chris Packham. Joining them will be many of Caught by the River’s regular contributors including author Amy Liptrot (reading from her hugely-acclaimed debut The Outrun); activist and author of ‘The Wake’, Paul Kingsnorth and genius audio-historian London Sound Survey.

Each day, the UK’s greatest independent publisher Faber & Faber will be presenting their own programme in the Faber Poetry Chapel. Florence and Virginia Astley will play rare live performances alongside readings from a selection of Faber New Poets and friends.

A full line-up for Caught by the River Thames will be announced in the coming weeks. This will include line-ups for stages from the Canal and River Trust, the Idler Academy, the Museum of British Folklore and the Caught by the River Bookshop as well as brewers represented in the Ten Mile Beer Festival and stalls in the global food court.

Caught by the River Thames is the brainchild of the website Caught by the River and the promoters Robomagic. Drawing on Caught by the River’s decade of experience promoting stages at events such as Port Eliot, Festival No 6, Field Day and the Good Life Experience and Robomagic’s extensive experience in staging festivals and events of all scales, the festival promises to be a unique highpoint of the London festival season a ready made escape plan for a two-day inner city musical road trip that explores the natural world and a multitude of mind-expanding spaces beyond it.