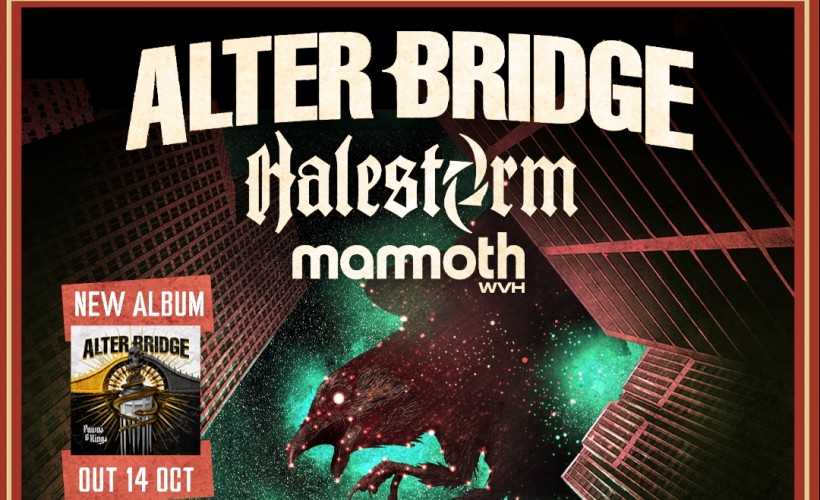 Alter Bridge formed following the disbandment of Creed in 2004. The band members include drummer Scott Philips, vocals shared between guitarists Myles Kennedy and Mark Tremonti plus Brian Marshall on bass. Feeling as if the band had run its course, Creed members Tremonti, Marshall and Phillips had been fans of Kennedy’s former band The Mayfield Four and were quick to recruit him into their new project.

Launching themselves into the music, Alter Bridge released their debut album One Day Remains in 2004. Produced by Ben Grosse (Marilyn Manson, Depeche Mode, Thirty Seconds To Mars), One Day Remains sold over 750,000 copies peaking at #5 in the Billboard Charts for fourteen weeks and would come to be certified Gold.

Their second album was released in 2007 and titled Blackbird. It rose to #37 on the UK Album Chart and featured the singles Rise Today, Ties That Bind and Watch Over You.

In 2009 they released their live album Live From Amsterdam through Amazon.com where it shot to #1 in their Bestsellers in Music Videos and Concerts chart in just eight hours, and remained there for several weeks despite receiving no official promotion.

Alter Bridge took a break due to Creed playing a reformation tour and returned in 2010 with the utilitarian titled album AB III which proved to be somewhat darker than the predecessors. Their latest release was the 2013 album Fortress which marked a period of successful experimentation for them.

The band have hinted at an upcoming album. Their fifth studio album should be released very soon and you can expect to hear new material at their highly anticipated upcoming shows.


This December sees the band embark on a thrilling tour of some of the UK’s biggest venues, including:


Alter Bridge concert tickets are limited so book early to prevent any disappointment.

Getting FOMO? Head to Gigantic for the best selection for gig tickets!

You want tickets? Gigantic has the best selection for music lovers!

Looking for a Christmas treat? Grab tickets for Alter Bridge!

Alter Bridge were amazing; everything I hoped they would be. The sound was just right and the light show was second to none. Hadn't been to the O2 before, but was impressed with the layout and helpful staff. The only thing I didn't like was trying to negotiate the steps down to my seat near the front with nothing to hang onto in the dark - it seemed to go on forever! But that's the only negative thing. The seats were great and we had a really clear view. I was impressed with Gigantic too, for the ease of buying them initially, keeping me informed of when I could expect my tickets and sending them when they said they would. Would definitely do it all again and worth every penny.

Very good had a great time,shame Alter Bridge playlist was a bit bland,otherwise the other bands where great

That's all we have for Alter Bridge! Check out their upcoming shows