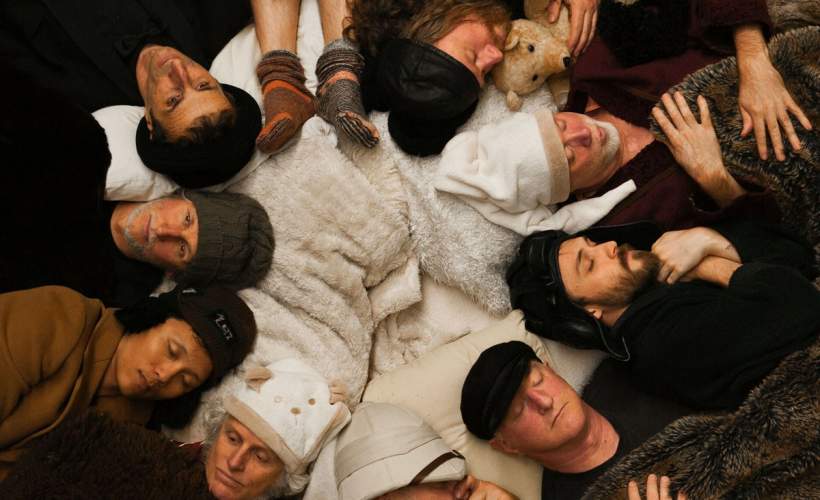 Having seen the UK's Fist full of Spooky earlier this year I was looking forward to seeing the whole international group.
A great show, especially items performed amongst the audience.
My only criticisms are 1- the set was a bit short & 2- the setting, although atmospheric, had poor sight lines for over half of the audience.

The choir leader was an absolute hute. Extremely funny with a dry sense of humour , very clever songs and it is the best performance I have ever seen of them . They get better each time. they sounded as one voice with harmonies built into the one voice.

Spooky men deliveted another wonderful show in Nottingham and left the full audience wanting more. Such incredible haunting harmonies! I felt as though there had been an extra layer of harmony added in the form of a layer of chocolate ganache , it was so deliciously surprising!!
Come back soon!#

"Something to make you smile"

First time to see them and they were totally wonderful. Harmonies fab. And great comedy.

The Spooky Men’s Chorale is a vast, rumbling, steam powered and black clad vocal behemoth, seemingly accidentally capable of rendering audiences moist eyed with mute appreciation or haplessly gurgling with merriment. Based on the twin pillars of grand foolishness and the quest for the perfect subwoofer-rattling boofchord, the Spooky Men seek to commentate on the absurdity and grandeur of the modern male armed only with their voices, a sly collection of hats and facial hair, and a twinkle in the eye.
Formed in the Blue Mountains of NSW in 2001 by Christchurch-born ‘spookmeister’ Stephen Taberner, the Spooky Men soon attracted attention with a judicious combination of Georgian table songs, pindrop beautiful ballads, highly inappropriate covers, and immaculate man anthems like ‘Don’t stand between a man and his tool’, all of which amounted to a manifesto for the new breed of man: happily suspended between thug and wimp.
The Spooky Men attracted wider attention at the National Folk Festival in Canberra 2004, which led to the first of six tours to the UK in 2006. Standout appearances amongst their 500+ gigs since have included (in Australia) WOMADelaide, The Great Escape Festival, Woodford, Cobargo, Port Fairy, Blue Mountains and Bellingen festivals. ABC TV appearances include The Mix, Spicks and Specks, and The New Inventors Grand Final.
In the UK/Europe they have appeared at major festivals including Tonder (Denmark), Malmo (Sweden), Cambridge, Broadstairs, Wickham, Camp Bestival, Towersey, Shrewsbury, and Edinburgh Fringe. Theatrical venues have included Union Chapel (London), St David’s Hall (Cardiff), The Philharmonic (Liverpool), Colston Hall (Bristol), the Sheldonian (Oxford) and Sage Gateshead.
The Spooky Men have recorded six CDs: Tooled Up (2004), Stop Scratching It (2007), Deep (2009), Big (2011), The Spooky Man in History (2013), and Warm (2015).
In live performance, the Spooky Men draw on a combination of musical and theatrical values that are elusive and multifarious. Notable themes and antecedents include Georgian male polyphony, a running joke on man as a vast, oblivious useless object, whispers of clown, bouffon and Monty Python, and forays into massively pleasurable grunting tribalism. The audience are invited to first joyously endure a wall of mansound, then laugh stupidly, then venture into areas of great tenderness. It is ideally not so much comedic as hilarious, not so much shimmeringly perfect as pleasingly and deeply human.