The Clone Roses announce their 25th Anniversary shows. Get your tickets with Gigantic! 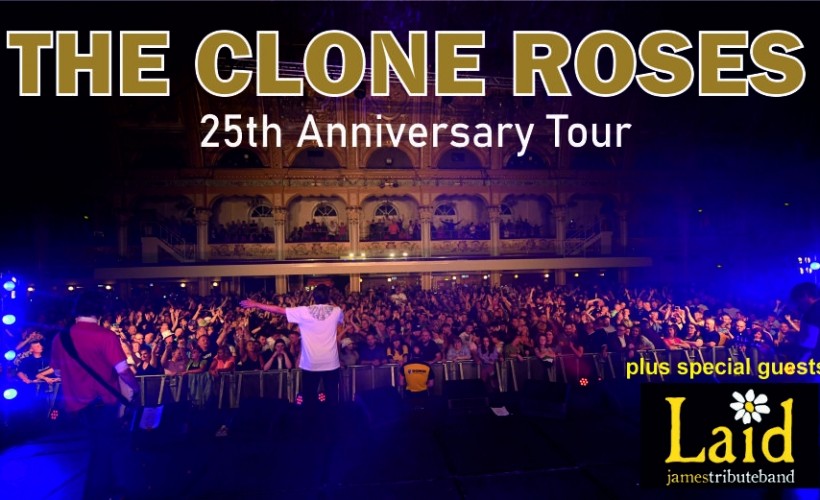 About The Clone Roses

2023 will see the 25th Anniversary of the UK’s leading tribute to The Stone Roses ‘The Clone Roses’. The Clones’ have performed at some of the most iconic venues in the UK, respectfully replicating some of the classic shows from The Stone Roses careers. From selling out Blackpool Empress Ballroom to performing the iconic Spike Island site on the banks of the river Mersey in front of a sell-out 15,000 strong crowd, the band have become hugely popular amongst Roses fans old and new, and they have a number of special 25th Anniversary shows lined up at some of the UK’s premiere venues. The Clones are widely regarded as one of the UKs premium tribute bands, a list that reserved for very few acts and have been described by Roses’ Bass player Mani himself as “the second-best Stone Roses in the world.” Special guests Laid, the country's #1 tribute to James.

Playing all the hits "Sit Down", "She's a Star" and "Laid" with official blessing from Tim and the band. “I can’t believe its not butter, the second best Stone Roses in the world. ” - Mani, Stone Roses “The Best Roses Tribute in the Business” - Clint Boon, Inspiral Carpets / XFM MCR

The Clone Roses are on sale right now. Concert tickets are available online through Gigantic but book early to avoid disappointment.

The Clone Roses To Play Glastonbudget

That's all we have for The Clone Roses! Check out their upcoming shows