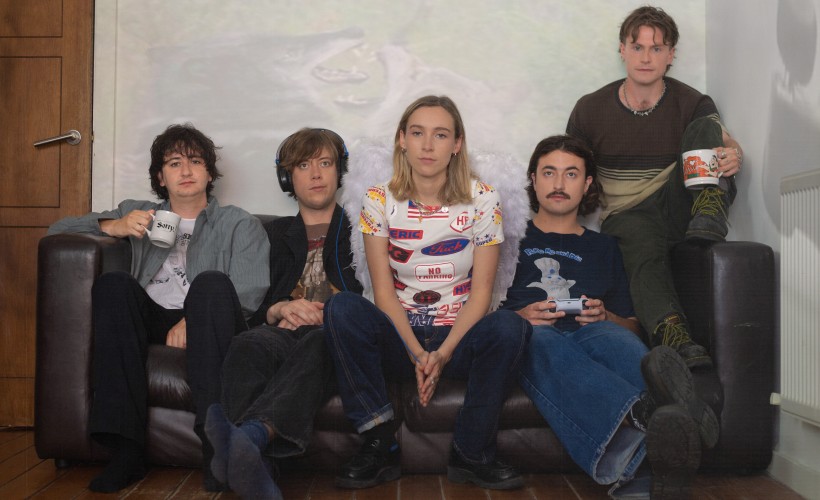 Who are Sorry? A gang of fools consisting ofAsha Lorenz and Louis O’Bryen, Campbell Baum, Marco Pini and Lincoln Barrett. Theyhave been making music together since their teens, havereleased oneacclaimed album, a batch of singles and a series of video sco-directed by their songwriter and vocalist, Ashaand her best friend Flo Webb(FLASHAProd). Emerging from Brixton’s Windmill scene, where they played alongside Shame, Goat Girl and Black Midi, Sorry have created their own distinctive musical world - one that draws together a shared passion for lo-fi sounds of grunge, trap, and shoegaze.

Sorry are a band with a devoted following on both sides of the Atlantic. Their 2018 single ‘Starstruck’, with its hook of a blocked throat clearing itself, has over 7 million plays on Spotify. The jittery ‘Cigarette Packet’ was arguably one of the best singles of 2021, with a video featuring an array of smokers with varying degrees of bad teeth. It’s a simple visual device, elegantly executed.

Asha and Louis first started experimenting with songs at school in 2015, where they recorded soundscapes and beats in their North London bedrooms, uploading them in a battle to achieve the most plays. It started out as a game between the two. ‘You’d be crying on Soundcloud at midnight when you should be sleeping, then you find this perfect beat,’ Asha recalls of that time. ‘I still take pride in it.’ Home Demo/ns Vol. I + IIare the band’s early mixtapes and provide a snapshot of deep cuts from the band’s beloved, genre-defying catalogue to date. -length album 925 (produced by Lana Del Rey and Gorillaz producer, Jamie Dring) was more electronic, Anywhere But Herepays homage to classic songwriters of the 1970s,such as Carly Simon and Randy Newman.

Led by Asha Lorenz & Louis O’Bryen, Sorry are the fresh new sound of 2020!

Considering Storm Dennis was ravaging the area for the whole weekend, I as pleasantly surprised at the amount of people who turned up on a Sunday evening for this intimate gig. Support band Roves were OK - a bit on the slow side, but they were only warming up for the main act after all. Sorry hit the stage on-time with some ominous wonky sample (which was pretty much the way things were before every song - with a similarly distorted version of 'Wonderful World' in there somewhere). I would have perhaps preferred more audience interaction between songs - letting the samples introduce the next track - but I guess that is the sort of band Sorry are. They started off strong with their recent single 'Around the Clock' getting the crowd going - but then the set began to sag. The Sorry sound is easily discernable: de-tuned guitars and dischordent clashes - with strange synth/samples in the background - and soft female vocals with spoken backing vocals, but the next 3 or 4 songs were not as strong as the singles I knew. Then the bass player picked up a sax and this is where the dynamics began to shift, and the audience interest picked up, as the second half of the set got much stronger. Apart from the excellent 'More' - there was another softer, slower track I really loved which reminded me of a female-led Cribs song. I really need to track that one down! In summary: a well-attended, good value gig - and a great opportunity to see and up-and-coming indie band in my back yard. Looking at the band members as they came off-stage, they seemed very young (compared to me!) - so I am sure there is a lot more to come as they mature musically.

Verified purchase
Best gig I have ever been to

Sorry are incredible. My new favourite band. As soon as they get within fifty miles of me I’m going to see them again.

That's all we have for Sorry! Check out their upcoming shows