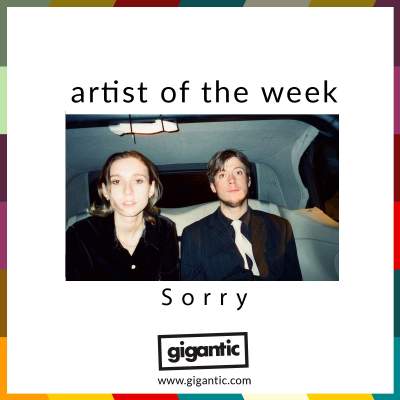 With the release of their incredible debut album ‘925’, North London based band Sorry have already proven to be one of the most impressive breakthrough acts of 2020. Led by multi-instrumentalists Asha Lorenz and Louis O’Bryen who share vocals, they inhabit a unique style that draws on elements of atmospheric art pop, trip hop and indie rock as heard on such impressive singles as ‘Right Around The Clock’, ‘Snakes’ and ‘As The Sun Sets’.

Childhood friends Louis O’Bryen and Asha Lorenz had already been playing together over the years, combing guitar riffs with elements of electronica and adding beats before joining up with drummer Lincoln Barrett and bassist Campell Baum to form the band Fish. They would soon find the title was taken and a cease & desist action would not only see them change their name but would also be a source of inspiration for the new moniker – Sorry.

In 2017, they became more serious as shown by their output which started with a collection of tracks called ‘Home Demo/ns Vol, 1’ which quickly found audiences around London clubs from their unique sound. They were special enough to catch the attention of acclaimed indie label Domino Records who released a split 7” of debut singles ‘Wished’/‘Lies’ that both took a moody approach which, whilst slightly raw, showed promising hints of innovation yet to come. They returned the following year with further singles ‘2 Down 2 Dance’, ‘Showgirl’, ‘Twinkle’ and ‘Starstruck’ which felt more polished and gave a clearer indication that Domino had certainly picked a winner.

Sorry continued their ascent with the release of second volume of ‘Home Demo/ns’ and further strong singles before expanding their number to include fifth member Marco Pina on keys. Teaming up with co-producer James Dring (Gorillaz, Jamie T, Nilüfer Yanya), they set to work in the studio to create their first full length record.

“We always thought working with a producer would be hard, but working with James was totally different as he was keen to work on the stuff we’d already done on the computer. He understood where we were coming from and wanted to collaborate rather than record it himself or stamp his mark on it like some producers try to do. He was a fan of what we’d started and just wanted to add to it and bring some of the big pop moments out.” – Louis O’Bryen

Expanding on the demos that had initially been created using Ableton, they recorded debut LP ‘925’ which takes its title from the concentration of sterling silver a reference to the song ‘Rock n’ Roll Star’ one of the many amazing singles contained including ‘More’, ‘Snakes’ and ‘As The Sun Sets’.

However, it would be first track ‘Right Around The Clock’ that would really make the public sit up and take notice. Benefitting from a considerable amount of airplay on BBC 6music, it would sufficiently raise their profile and make their first record one of the most anticipated of the year. ‘925’ is now released by Domino and is available on CD, Silver 12” vinyl and 12” vinyl – out now via Domino.

Be amongst the first to say they saw Sorry on their clear inevitable rise to the top when they tour stunning debut album ‘925’ in the latter months of this year, giving you a rare chance to see the pair before they explode into the mainstream. Tickets for Sorry are on sale with Gigantic right now!