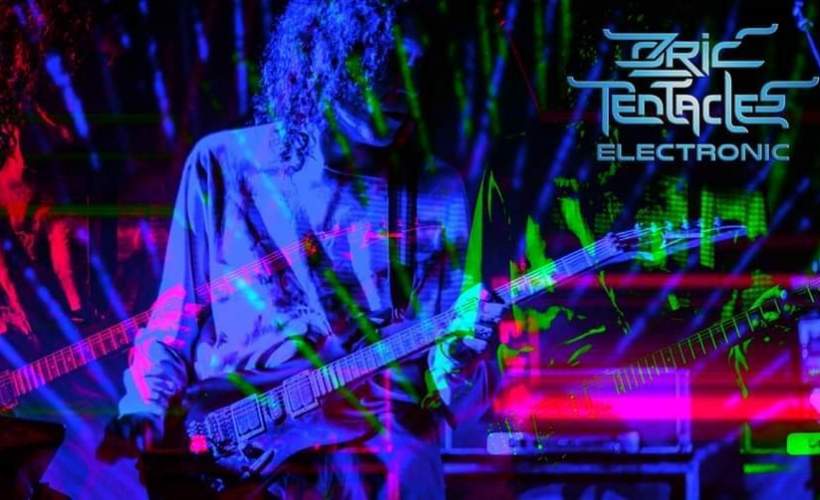 Tweet
Classic psychedelic rock band Ozric Tentacles have just announced an extensive tour. Make sure you grab a ticket to see them play at Hare and Hounds in Birmingham, The Soup Kitchen at Manchester, The Cluny 2 at Newcastle and Glasgow’s Mono during May 2020.

Later in the year sees them also make headline appearances at Green Door Store in Brighton and The Lexington in London during September plus The Globe at Cardiff on Wednesday 14th of October 2020.

Now is your chance to book your Ozric Tentacles tickets with Gigantic, we are very excited and as demand grows it makes sense to act fast and get yours before they are all taken. Gigantic makes selecting your favourite tickets and placing your order easy by enabling access to our site 24/7 using your smartphone, tablet or computer whilst relaxing at home or even busy and on the go.

A band from another time, Ozric Tentacles served as the bridge from '70s cosmic rock to the organic dance and festival culture that came back into fashion during the '90s. Formed in 1983 with a debt to jazz fusion as well as space rock, the band originally included guitarist Ed Wynne, drummer Nick Van Gelder, keyboard player Joie Hinton, bassist Roly Wynne (Ed's brother), and second guitarist Gavin Griffiths (who left the group in 1984). The Ozrics played in clubs around London, meanwhile releasing six cassette-only albums beginning with 1984's Erpsongs. (All six were later collected on the Vitamin Enhanced box set, despite a threatened lawsuit from the Kellogg's cereal company for questionable artwork.) In 1987, Merv Pepler replaced Van Gelder, and synthesizer player Steve Everett was also added.

Ozric Tentacles' first major release, the 1990 album Erpland, foreshadowed the crusty movement, a British parallel to America's hippie movement of the '60s. Crusties borrowed the hippies' organic dress plus the cosmic thinking of new agers, and spent most of their time traveling around England to various festivals and outdoor gatherings. The movement fit in perfectly with bands like Ozric Tentacles and the Levellers, and the Ozrics' 1991 album Strangeitude became their biggest seller yet, occasioning a U.S. contract with Capitol. After the British-only Afterswish and Live Underslunky, 1993's Jurassic Shift -- featuring flutest John Egan, who would become known for his on-stage trance-dancing during the group's live performances, and new bassist Zia Geelani in addition to original bassist Roly Wynne, who departed the band in 1992 -- hit number 11 on the British charts, quite a feat for a self-produced album released on the Ozrics' own Dovetail label. The album was released in America by IRS Records, as was 1994's Arborescence. Neither album translated well with American audiences -- despite the band's first U.S. tour in 1994 -- and Hinton and Pepler left the band that year to devote their energies to their dance side project, Eat Static, releasing several albums on Planet Dog Records.

Ozric Tentacles returned to their Dovetail label for 1995's Become the Other, featuring new members Rad and Seaweed, who also appeared on 1997's Curious Corn. Ed Wynne's brother Roly, whose later life had been plagued with difficulties, committed suicide in 1999, a tragic development for the Wynne and Ozrics families. However, the band forged on, closing out the decade with the release of Waterfall Cities that year, and during the summer of 2000 the Ozrics resurfaced with Swirly Termination.

By 2004's Spirals in Hyperspace, Ozric Tentacles were largely guided by sole original member Ed Wynne, who was responsible for guitar, keyboards, and beat programming on the studio effort, which nevertheless included appearances from previous Ozrics contributors Zia, Seaweed, John Egan, and Merv Pepler, plus drummer Schoo (who had replaced Rad after the former's departure following a 2000 U.S. tour), Ed Wynne's wife Brandi Wynne on bass, and even space rock/electronica guitar legend Steve Hillage. Released in 2006, The Floor's Too Far Away continued the trend of Ozrics domination by Ed Wynne. A live appearance from June 2007 was documented in 2008's Sunrise Festival disc, and 2009 saw the release of a new studio album, The Yumyum Tree. Inspired by Lewis Carroll, the latter album featured, in addition to Ed Wynne in the leadership role, Brandi Wynne on keyboards along with bassist Vinny Shillito and drummer Roy Brosh. Yet another permutation of the latter-day Ozrics was a true Wynne family affair, with Ed joined by his son -- and the late Roly's nephew -- Silas on synths, wife Brandi back on bass replacing Shillito, and Ollie Seagle on drums. Following the release of 2011's Paper Monkeys, the Wynnes' Colorado home and studio were destroyed by wildfires while the band was away on tour.
The fires resulted in a loss of various archival material, instruments, equipment, and other valuables. Rebuilding and returning with a revitalized approach, Ozrics delivered the double album, Technicians of the Sacred, in 2016, a release which many fans saw as a creative return to form.

Stocks for all events are limited, so you will have to book your Ozric Tentacles concert tickets early or run the risk of missing out. Gigantic has been proud to provide excellent customer service for ten years, so you know we are the right place to book your essential gig tickets whenever you are planning your big night out.