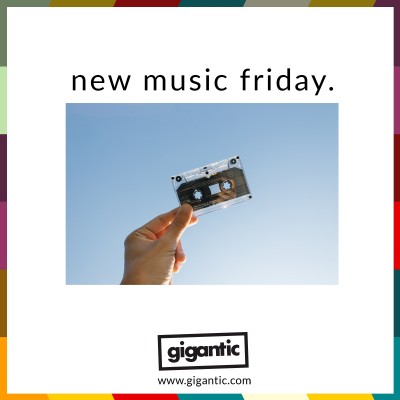 Ready for the soundtrack to your weekend? #NewMusicFriday brings you the very best new tracks, EPs and albums so you can enjoy the freshest beats and the latest sounds getting you ready for when you hear it live.

Remember, Gigantic always has the hottest tickets for all the acts you love so stick with us for the very best experience.

Jess Glynne is no stranger to success. Having topped the charts with debut album ‘I Cry When I Laugh’ which featured her essential song ‘Hold My Hand’ and saw fill her mantelpiece with many Best Newcomer awards.

With the release of her highly anticipated follow up album ‘Always In Between’ in October, Glynne has just dropped her new single ‘All I Am’ which sees her reflect upon her career so far and appreciating all the people that helped her get onto the mainstage. Catch her massive shows at Birmingham’s Genting Arena and The O2 Arena in London during November.

Dutch/Kiwi hypnotic dance band My Baby are back with their brand-new track ‘In The Club’. Drawing influences from the Roaring Twenties, their latest offering also exhibits their penchant for soulful vocals, a bluesy beat and infectious feel.

‘In The Club’ is taken from their next album. And while we are still waiting to find out more details about their length full length record including the title (!), we are very pleased to be able to offer you tickets for their handful of upcoming UK dates which includes performances in London, Brighton and Bristol over the latter months of the year.

MY BABY tickets are currently available.

When they’re not tinkering about with their name, relentlessly prolific West Coast psyche rockers Oh Sees are either making blistering performances onstage or hidden away in the studio conjuring up yet another monstrous masterpiece.

Having previously released at least one album every twelve months, it comes as little surprise that new LP ‘Smote Reverser’ comes almost a year later from its predecessor under the new moniker; ‘Orc’. What is astonishing however, is how they manage to continue their rampant forays into the extremes of garage rock without suffering from diminishing quality or showing any fatigue.

‘Smote Reverser’ is a playful descent into madness, adopting the use of jazz guitars, frenetic keys and frenzied howls into the darkness. Their true moment of daring comes with the out of this world twelve-minute track ‘Anthemic Aggressor’ which loosely spirals around a pulsating bassline joined by snatches of glitching guitars to become a marvellous freeform orbital oddity.

Brighton trio Our Girl are our new favourite band in the Gigantic office and we can’t get enough of their debut LP ‘Stranger Today’, released through Cannibal Hymns.

Having already impressed with a steady stream of dynamic alt-rock singles, ‘Stranger Today’ shows a real development of their sound as the highly polished production manages to capture the spontaneity of their live performance whilst they also confidently tackle more complexed song writing.

The result is a joyous record which documents a coming of age for the band as they truly begin to inhabit a sonic space of their very own, defined by daring experimentation and satisfying roars of distortion.

Our Girl tickets are currently available.

Lucie Silvas layers up her Americana influences with powerful pop sensibilities on her new album ‘E.G.O.’. The first taste of the forthcoming LP came with the truly epic track ‘Kite’ which describes the irrepressible nature of the female essence:

"I wanted to capture a woman’s inability to be held down. That even without any real sense of direction of where she is going, she wants to be free to just go wherever the wind takes her. Her spirit can get her in trouble sometimes, but it’s what keeps her feeling alive."

You can see her when she when she joins Brothers Osborne, playing support on their November tour. Click the link below to get your tickets for all dates she is announced to play.