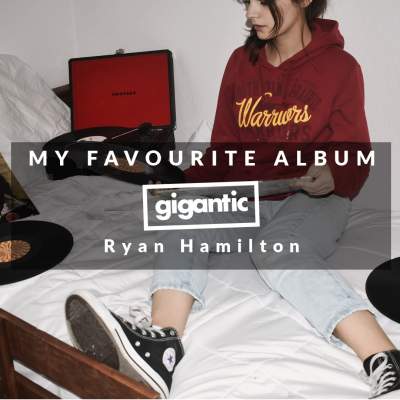 Gigantic is back with the latest edition of My Favourite Album – the revealing blog that gives a personal insight into the records that inspire performers and key figures in the music industry. This week, we are very pleased to be joined by Texan musician Ryan Hamilton!

The singer/songwriter is leader of the Transatlantic rock n’ roll band Ryan Hamilton & The Harlequin Ghost who got off to a flying start with the release of impressive debut album ‘This Is The Sound’ which was given the prestigious title of Album Of The Year at the Independent Music Award upon release last year.

This year has seen the release of eagerly awaited second record ‘Nowhere to Go but Everywhere’! Written and recorded whilst on the road playing an acoustic tour around the UK, Hamilton paired up with producer Dave Draper and was able to get the record finished and released just before the world closed down due to COVID-19 – with further sessions adding the final touches recorded in his very own Texan home studio.

Showing extraordinary prolific creative powers, Hamilton was able to make the most of the time afforded to him by the pandemic and poured all his passion for Country into his newly released ‘Incommunicado’ EP. The results of his home recording were incredible and scored the star his first Number 1 on the iTunes Country Chart.

It's impossible to pick just one, I basically have a rotating list of about 50 favorite albums. Haha. But I'll go with my CURRENT all time favorite. My current all time favorite has to be Tom Petty’s ‘Wildflowers’.

I remember seeing the music video for ‘You Don't Know How It Feels’ on MTV. Ya know, when MTV used to actually play MUSIC VIDEOS. Haha

That album (and that song in particular) is very special to me. It’s got the perfect combination of beautiful moments, happy moments, sad moments, upbeat songs, rock n roll songs, slower acoustic tracks… and the songwriting craft is truly inspiring. Something about the combination of Rick Rubin and Tom Petty is magic. This album feels raw, yet beautifully produced at the same time.

I have 2 favorite songs, and coinciding lyrics. ‘You Don't Know How It Feels’, and ‘Wildflowers’.

The lyric: "You don't know how it feels, to be me" is really simple. But somehow, really powerful. It's a sentiment that everyone can relate to, and that's it's genius. Simple, yet complex, and relatable... all at the same time. That, in a nutshell, is the genius of Tom Petty.

The other lyric I have to mention is, "You belong among the wildflowers, you belong in a boat out at sea, Sail away, kill off the hours. You belong somewhere you feel free". For me, that is the lyrical equivalent of a beautiful painting. If you close your eyes during that song, you can imagine the scene he is setting. So wonderful. So beautiful. Full of sadness, and hope at the same time.