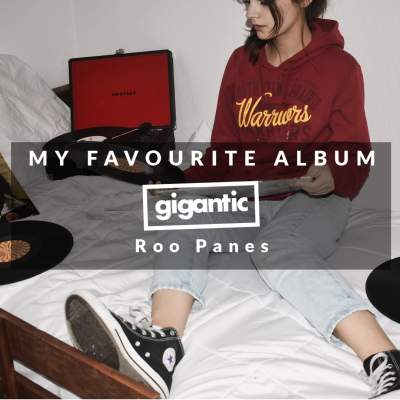 Gigantic is searching to complete the perfect record collection by asking musicians and key figure within the industry to contribute to My Favourite Album blog and tell us a little about the music that inspires them. Talking us through their top choice this time is famed folk songwriter Roo Panes!

Dorset born Andrew Panes takes his nickname Roo from the beloved Winnie-the-Pooh character, a fitting moniker for a musician known for his emotive power that pull on the heartstrings. His impressive career has already seen him accrue a staggering 200 streams on Spotify and a further 20 million views on YouTube, with fans flocking to listen to his debut album ‘Little Giant’, successor record ‘Paperweights’ and his critically acclaimed latest LP ‘Quiet Man’ which dropped in 2019.

This year has seen the release of Roo Panes’ extraordinary ‘Pacific’ EP! Expressive and evocative, the five tracks are perfect for these turbulent times as he explores themes of isolation and refuge through intimate songs like the title track ‘Pacific’ and ‘There’s A Place’ whilst ‘Colour In Your Heart’ sees him explore electronic beats and ‘Listen To The One Who Loves You’ and ‘The Sun Will Rise Over The Year’ both rise to become uplifting anthems on an epic scale. Click HERE to stream and download the ‘Pacific’ EP.

Today the one that springs to mind is "Legend - Bob Marley”

I first heard this at school. When I was a teenager I used to listen to this album on every car journey. I know it’s a compilation more than an album - but it’s still my go to.

I don't think people always expect me to be a reggae fan...but I am a huge admirer of Bob Marley's writing, as well as his arrangements. For me it was like finding a whole new world of sounds, from Hammond organ to weird unidentified noises. I also find it a really evocative collection of songs and one that encompasses that simple feeling of enjoying making music with friends. Still to this day my family know that if I'm in a terrible mood all you have to do is play Bob Marley and I can't help but smile, it's a running joke.

My favourite on the collection is ‘Stir It Up’ because it's really nostalgic for me, and the instruments used on the track I'd certainly never heard in other recordings I'd encountered. There's a balance and decisiveness to his songs that as a writer makes me consider him a natural talent.