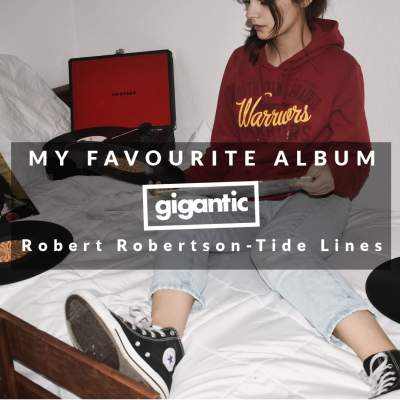 My Favourite Album is the blog written by influential musicians and key figures in the industry, and this time round we are graced with a contribution from Robert Robertson – singer of anthemic folk rock band Tide Lines.

Hailing from the Highlands, Tide Lines would be named “the Rising Sound of Scotland” at the Nordoff Robbins Scottish Music Awards following their evocative debut album ‘Dreams We Never Lost’ which infused traditional melodies with a contemporary sound.

Their success continues to grow with the release of their brand-new album ‘Eye Of The Storm’ whose stirring songs saw them break the Top 20 UK Album Chart plus top both the Scottish and Independent album charts. ‘Eye Of The Storm’ is now available on CD, 12” Vinyl and all streaming sites.

Tide Lines have announced a huge tour in support of the phenomenal new album ‘Eye Of The Storm’ which sees them play unmissable huge headline dates across the UK during April 2021. CLICK HERE to book your ticket with Gigantic right now!

1975 - it was Springsteen’s third album and his first to have real mainstream commercial success. He knew that it was a make-or-break point in his career so apparently, he was painstakingly meticulous throughout the writing and recording process. I love the story about how the pressure got to him one night and he attempted to throw the tapes into the swimming pool.

I was 17 and had just moved away from the Highlands and down to Glasgow to study. My musical tastes were expanding very quickly at that point and ‘Born to Run’ particularly chimed with me because of the theme of getting out of a small town and having the whole world in front of you.

I’ve always felt that Springsteen perfectly bridges the gap between the folk music I was brought up with and mainstream rock. The folk influence is most obvious in stuff like the Seeger Sessions but I can hear it in so many of his most famous melodies and particularly in the ‘Born to Run’ album. His mother was of Irish decent so perhaps that, along with the influence of American folk artists like Dylan, is the reason for this. That’s why the music means so much to me but the lyrics on this album also mean a great deal. I always feel you could swap Freehold, New Jersey, with any small Scottish town and the messages of his songs would still ring true.

My favourite song on the album is the opening track, ‘Thunder Road’. It epitomises everything I’ve been saying above. The idea that a town has one road passing through that is basically your gateway to the world is something that immediately appeals to someone from the Highlands of Scotland like me so I would have to single out lines like:

But just the general wonder and opportunity of the lyrics (such as “Show a little faith there’s magic in the night”) always moves me.

I saw the Boss live in Hampden a few years ago. He was touring the album ‘The River’, which I also love, but I was particularly looking forward to hearing ‘Thunder Road’. His shows go on for 3.5 hours at least with no break; so inevitably I had to pick a time to go to the toilet. As I was standing in the queue at the back of the stadium, I faintly heard the distant piano and harmonica intro to ‘Thunder Road’! So, I’ve still not properly heard the song live.