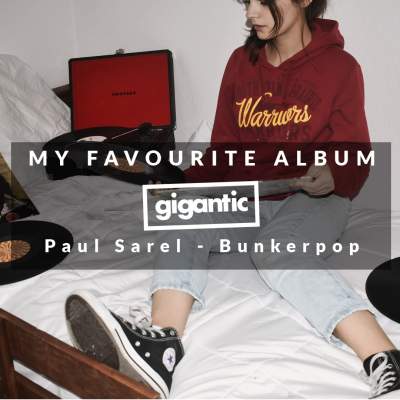 This week, My Favourite Album is brought to you from the weird and wonderful mind of Paul Sarel who is leader of Bunkerpop, the Hull based experimental electronica band that combine an anglicised take on krautrock with chiptune and lo-fi indie pop. Formed in 2016, their recent gigs have seen numbers swell owing to their anarchic nature, building a sizable underground following with their infectious rhythms that see the boiler suit adorned band members leading ever growing conga lines around the dancefloors at every gig. But remember, they’re not a cult (honest).

Bunkerpop released their critically acclaimed eponymously titled debut LP last year on their very own label Fast & Bulbous Records and you can grab a copy on Double Vinyl or a Digital Album right now HERE!

Currently working on their second album, Sarel took the time out to give us a detailed account of his love of David Byrne and Brian Eno’s seminal shared album ‘My Life In The Bush Of Ghosts’.

It really was a toss up between this album and ‘Remain In Light’ by Talking Heads which in actual fact is the groovier, funkier younger sibling album to this more experimental offering from the Heads frontman David Byrne and their producer Brian Eno.

When Bunkerpop were recording our debut album we knew we’d be taking influences from ‘Bush of Ghosts’ as it compromises mostly instrumental tracks with samples and found sounds to use as a narrative throughout. The samples are used essentially as the lead vocal which is a technique Bunkerpop use too. It’s undeniably a rhythm album. Nothing in the way of guitar solos or traditional lead instruments. It’s all in the hips. There is barely a chord change and definitely no choruses or verses. Strange Grooves.

When you consider the tracks for ‘Bush of Ghosts’ were recorded between 1979 and 1981 it tells you how very ahead of its time it was. Samples were being used to terrific and often morbid effect here, sometimes aggressive and other times confusing. Some are spliced up and stuck back together again to make the voices of preachers, radio call-ins or mountain singers from the far east make perfect sense despite the chaos.

It’s a brilliantly eclectic album that leads off with the rhythmic beats of America Is Waiting which features some of my very favourite chicken scratch guitar playing that instantly has me jerking around the room wiggling my arse and nodding my head.  Despite its weirdness I find I can can still dance to it. It’s edgy.

Mea Culpa. This time the tapes have been chopped and spliced to create what sounds like an argument between two voices. One turns out to be an irate member of the public and a smooth-talking politician fobbing him off. 40 years later we’re still there. This tune builds with percussion being used to brilliant effect as the conversation intensifies…It makes my toes jump out of my shoes.

Regiment is the grooviest tune on the album and features Talking Heads drummer Chris Frantz’s straight ahead drumming, Lebanese vocals, percussion and bass to deliver the closest thing on the album to ‘a song’. The sound of this track is very satisfying. It pleases me but I can’t explain why.

Help Me Somebody is probably the closest in stylings to the Remain In Light tunes as it follows the Once In A Lifetime preacher man rantings but with a sample from a radio sermon in 1980. The repetitive guitar pattern is another tool that Bunkerpop use. Change through Repetition is a rule we often enjoy. It gallops along at a great pace with crows crowing in the background and what sounds like bits of metal being used percussively to punctuate the narrative.

The Jezebel Spirit features a disturbing exorcism as the focus. Autobahn style synths whip in and out and the incessant jangle of the guitars, once again stuck on one chord being led along with fat stodgy bass line that Bunkerpop are sure to rip off at some point. The bass is an important instrument in Bunkerpop…you can hang everything off a brilliant bass line which frees you up to improvise off it. This tune is disturbing and awkward. I adore it.

Qu Ran opens side two with ambient squawks and Eastern scales being sung over heavy beats and bass. There’s a message from another world which I can’t understand but it sounds important to the men singing it. We like to use foreign languages on tunes. We got fed up with hearing the same old ‘messages’ in the same old style a long time ago.

Moon light In Glory tells a story underscored by music which appears to be played on pots and pans and with spoons, spanners and bits of wood being bashed whilst a seductive female vocal sweeps in. It’s experimental, features no guitars and holds it’s lilting mood throughout. Brilliant music doesn’t always have to be quiet, loud, quiet….slow and steady wins the day on this one.

The Carrier is the most ambient tune on the album. Pings and pongs with reverb and echoes. It once again challenges what you think a ‘song’ should be. It’s quite beautiful and floaty.

A Secret Life features more Lebanese scales from the mountain tops. At no point do you want to miss out on the message from the singer. She’s in a hot land and what she has to tell you is mystical and mysterious.

Come With Us closes the album with it’s clunky percussion and journey towards what seems to be some far away sun in a tin pot space ship. The narrator is telling us to come with him. Is it a cult he wants us to join? Bunkerpop would certainly encourage you to sign up and enjoy the ride.

So, there you have it. ‘My Life In The Bush Of Ghosts’ is awkward, brilliant, foreign, repetitive and chaotic. These are the motivations I live my life by.

It’s what Bunkerpop aspire to be.