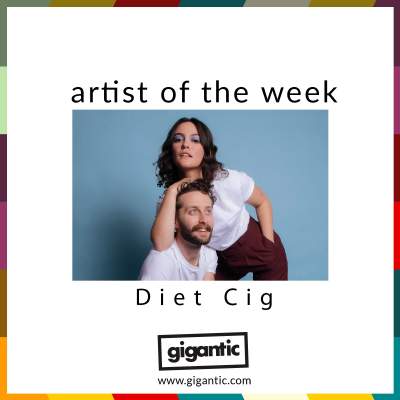 “Everyone’s got the magic in them and if you want to start a band, start a band.” – Alex Luciano

Both studying in New York during 2014, Noah Bowman was already in the band Earl Boykins before he met Alex Luciano who was more involved in working behind the camera at the time. Playing a house gig, Luciano accidently interrupted the set to ask for a light and found herself talking to Bowman about the prospect of making a video for them.

“We met at a show when I was a student in Digital Media Production. I gave Noah my number and told him I could make a music video for them. I ended up going to a couple of their shows. They looked like they were having so much fun and I soon realized that I also wanted to make music.” – Alex Luciano

Borrowing a guitar off Bowman, the pair clicked instantly and rapidly began writing songs for what would become their debut EP ‘Over Easy’ which was recorded in a single night on Halloween, creating the sugary sweet uplifting template that would became Diet Cig’s signature sound – despite not even having a name for the band yet!

As word got out they were both working on something new, they were approached to play a gig and realised they needed to choose a title so temporarily picked Diet Cig with a view to maybe change it later. The name stuck and quickly spread as word got out just how damn good they were!

After self-releasing the ‘Over Easy’ EP plus the single ‘Sleep Talk’; the doublet were approached by NYC based independent label Frenchkiss Records who signed them before they hit the studio to create their first album ‘Swear I’m Good At This’. Recorded at Salvation Recording Co., it came out in 2017 and included such awesome singles as ‘Tummy Ache’, ‘Barf Day’ and ‘Link In Bio’, capturing widespread attention and turning their fanbase global.

Last month saw the duo drop their second LP ‘Do You Wonder About Me?’, again with Frenchkiss Records which is packed full of incredible songs making it an all killer no filler record. The new album kicks off with the single ‘Thriving’, an earnest unwrapping of relationship that became damaging before it ended. Diet Cig explain the song is “about the duality of absolutely THRIVING without someone but also desperately wanting them to notice you doing so. Inspired by the melodrama of reality TV and musical theatre, we wanted the song to bounce back and forth between a lavish personal anthem and the anguish of feeling forever beholden to others opinions.”

It then moves on to ‘Who Are You?’ which similarly takes past pain and transforms it into an affirming anthem, taking charge of you life once again and moving on.

“‘Who Are You?’ is for anyone who’s ever received a completely self-serving apology from someone who’s hurt them. I learned that healing doesn’t wait for an ‘I’m sorry’ to appear, and it can feel silly to have one arrive when you’re completely over it. This song takes these bad feelings and turns them into a fun upbeat jam to dance around in your kitchen to!”

Diet Cig will be touring the new record in November. Tickets on sale with Gigantic right now!