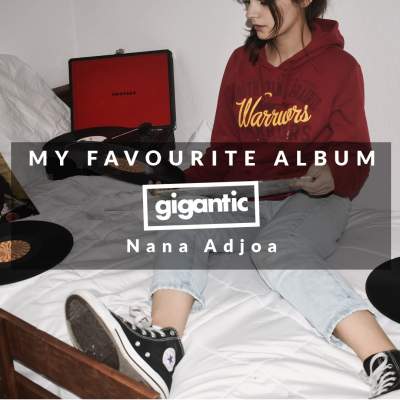 Welcome back to another edition of My Favourite Album where we are treated to an excellent record choice, curtesy of experimental multi-instrumentalist Nana Adjoa.

Dutch-Ghanian singer-songwriter Nana Adjoa is unafraid to address complex topics through her unique fusion of R&B and alt pop with compelling lyricism which taps into her training as a jazz musician.

This week sees the release of Nana Adjoa eagerly awaited debut album ‘Big Dreaming Ants’. Both written and recorded in her very own studio, Nana’s first full length record is a personal account of the new generation’s experiences of race, gender and politics. It includes such impressive tracks as ‘No Room’ which deconstructs conversations through clever use of metaphors, and ‘I Want To Change’ that explores her own unique dreamscape, visualising all the possibilities life offers through complex relationships.

Nana has just dropped her powerful new single ‘National Song’ which questions the constantly changing balance of individual and cultural identity in a world which is subject to ever-greater globalisation. Do we embrace the breakdown of borders or do we retreat into nationalism out of fear?

Released on Thursday 24th of September via Bloomer Records, CLICK HERE to pre-save and pre-order your copy of ‘Big Dreaming Ants’.

I was in high school, but not sure what age exactly. Somewhere around the age of 15/16 probably.

To me it was really a pivotal moment. I grew up listening to my parent’s music which was a blend of soul, funk, reggae and 90’s R&B. When I started playing bass guitar (at the age of 10/11) and played in my first band and I moved out of that area to more rock that started with the likes of the Red Hot Chilli Peppers, Seattle grunge bands, Rage Against The Machine and such, and moved backwards in time to Led Zeppelin and stuff. And then, I don’t remember how or when it happened, but I came across Jeff Buckley, and it was like I had found this new universe in which music could exist. It just moved me like nothing had ever before. I remember laying in a hammock in the backyard of the house I grew up in, listening to the album ‘Grace’ over and over again on my mp3 USB player.

All the songs, the different dynamics, the different uses of his beautiful voice, the soul and above all this whole mysterious vibe throughout the album. At that point, I had that feeling of finding a deeper meaning in life or for oneself through music. After that moment, it happened with other music and records too— this feeling of newfound truth or understanding, but I guess it’s that first time you have that feeling that it sticks the most. It was probably just the perfect album for me as a teenager. Pretty dramatic, mysterious, rich and rebellious in a lot of not so obvious ways. Also, I’m definitely not the only one whose had this experience with this record. It’s special. I think that this album planted the seed that made me want to become, not just a musician (I have been a bass player in a lot of bands for many years), but also a songwriter and singer as a way of expressing myself.

I think my favourite song(s) of this record have changed over time. Used to be more the dreamy tracks like 'Mojo Pin', 'Grace' and 'Dream Brother'. Now I’m at:

But kiss me out of desire, babe, and not consolation

I'll only make you cry, this is our last goodbye”

I haven’t and don’t listen to this record a lot. Max twice a year. Because it still

has this intense effect on me. It’s like reliving a memory of the first couple of

times I heard it, and I think in the back of my mind I’m afraid it will lose that

intensity if I listen to it too much. I have that with some other records too, haha.

Same goes for ‘A Love Supreme’ by John Coltrane. It has a kind of magic I’m

afraid to wear out.