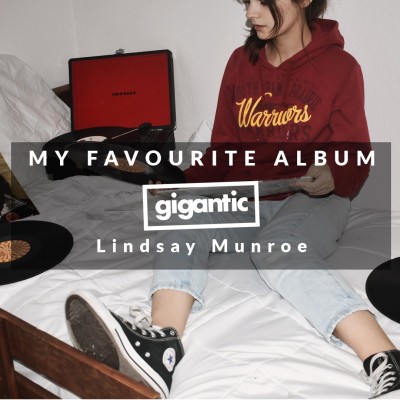 We are back with another insightful edition of My Favourite Album which speaks to cutting edge acts about the music that inspires them. Gigantic is very excited to be joined by Lindsay Munroe.

Boldly showing her vulnerable side, Manchester born songwriter Lindsay Munroe dares to reveal all in her intimate music which includes both a deep introspective side plus her dazzling command of evocative observational lyrics.

Channelling a blues rock feel with a confessional anthemic sound, Munroe has impressed the likes of Line Of Best Fit and earned a roster of famous fans including Sharon Van Etten, Laura Marling and Marika Hackman following the release of her acclaimed debut EP Our Heaviness.

This year has seen the release of new single “Need A Ride”. Tough yet tender, it is a perfect summarisation of Munroe’s music and is her most accomplished work yet. “Need A Ride” unveils an artist ready to breakthrough into the mainstream and become the big new name of 2021.

Lindsay Munroe has also announced headlines dates, playing Gullivers at Manchester and The Grace in London during November – tickets on sale with Gigantic HERE!

This is an impossible question as I’m fairly fickle with my obsessive interests, but my gut is pulling me towards my 2020 obsession: The Rise and Fall of Ziggy Stardust and the Spiders from Mars by David Bowie.

It’s such an iconic album that I think you just sort of absorb a lot of the songs over the years. I don’t think I sat down and properly listened to the whole album until a year ago, though. For many years I only knew Bowie as Jareth The Goblin King from the film The Labyrinth.

I’m in awe of how bold it is as a record. Bowie’s previous album Hunky Dory wasn’t a commercial success, so making an album that tells the story of being a Rock n’ Roll playing space messiah got so famous he was killed by his own fans was an absolutely insane artistic choice. The whole album crackles with this raw energy, swagger and humour. It’s not an album that I have some huge personal emotional connection to, it’s just so iconic that I love getting caught up in the fandom and story of it. If you love Bowie, listening to this album you become one of those fans that are screaming for Ziggy, to have him sing directly to you in the final track: “Give me your hands, because you’re wonderful”.

“Five Years” is one of my all-time favourite songs. From the apocalyptic setting to the brilliant lyric “a cop knelt and kissed the feet of a priest, and a queer threw up at the sight of that”. My favourite lyric, though, is “It was cold, and it rained so I felt like an actor” which validates every time I’ve walked down the road feeling like a narcissist for imagining the music in my headphones as the soundtrack to my own movie.

“Moonage Daydream” is, of course, another classic. Screaming “I’ll be a rock n’ rollin bitch for you” along with the track is a favourite pastime of mine. I’m currently doing an MA in Contextual Theology and my love for this album extends to having recently written an essay that focuses heavily on Bowie in the 70s. I used a lyric from this song as the title; “The Church of Man, love, is such a holy place to be”.

Special mention has to go to the titular “Ziggy Stardust”. It’s an absolutely iconic song, but beyond that I take particular joy in knowing that Bowie had a lifelong commitment to fitting the word ‘ass’ into songs; from Ziggy’s “God-given ass” to his final album Blackstar, released two days before his death, in which he reminded us “I was looking for your ass”.

I recently recorded a track for which we used Five Years as a drum guide. Keep your ears peeled for if you can spot the reference.