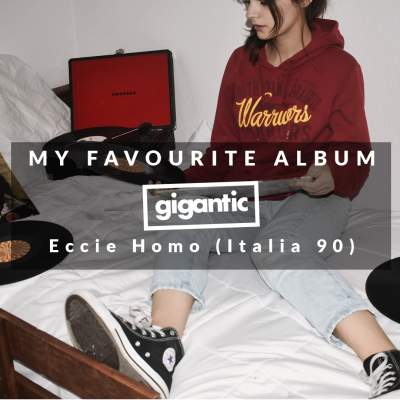 We are back with another fine edition of My Favourite Album which reaches out to pioneering performers and key figures in the industry, to talk to them about the records that have inspired them. We are joined this week by Eccie Homo – guitarist of Italia 90!

The latest in the new pedigree of post punk; Italia 90 are the Brixton born band which formed in 2018 and have already secured a dedicated following thanks to their vitriolic live performances plus snarling singles and essential EP releases through Fierce Panda. Combining agitational politics, sardonic wit, and left field Lo-Fi deconstructed riffs, they have quickly established themselves as the essential new sound of the British underground.

Last month saw Italia 90 drop their new stripped down single “Borderline”, which is their scathing attack on a callous and indifferent political elite. Complete with b-side “Declare”, it is their first release via Brace Yourself Records and signals the beginning of their infiltration into the mainstream.

I have a really strong memory of first hearing it whilst eating Shepherd's Pie on a cold Sunday evening, probably around the turn of the millennium. Now whenever I hear it, I swear I can almost smell the faint waft of mashed mince.

What Does It Mean To You?
Steely Dan have always made extremely ornate and complex music, but I think Aja works so well because it distils this complexity into a format which is so concise and neat. It's very restrained but you can hear the amount of labour that has been put into the instrumentation and composition. It's also common for studio engineers to test the sound quality of new speakers by playing this record, because it's such a benchmark for production. I read that Fagen & Becker worked with several backing bands at a time, to find particular permutations that worked well for a particular song. Bonkers!

Talk Us Through Your Favourite Songs And Lyrics On The Album
I think “Deacon Blues” is really the crown jewel of Aja. It's famous for its opening sequence with those trademarked 'mu major' chords, but I also don't think I've ever heard a song that so beautifully encapsulates the mindset of an ambitious loser. Some people have suggested it's taking the piss out of washed-up musicians, but I think it's more autobiographical and earnest than that. I strongly identify with the aspiring anti-hero in that song, who just wants to gamble, drink whiskey, and be known as “Deacon Blues” from now on. The track even features Bernard Purdie, one of my all-time favourite drummers. He apparently used to come into the studio and place two signs either side of himself when recording: one saying "you done it!" and the other saying "you done hired the hitmaker, Bernard 'Pretty' Purdie"

Anything Else You Want To Add?
Fuck the police.