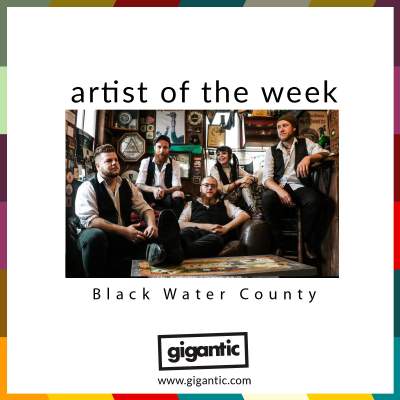 Giving gigs a good kick up the arse and booting Celtic folk punk energy into every performance - Black Water County are the rowdy bunch that are the ultimate soundtrack to the good times. Their unique take on traditional sounds was first heard on debut album Taking Chances and saw them steal hearts of fans around the world.

With the release of their stunning second album Comedies and Tragedies last year, comes news of a headline tour in support of the essential record. Headline dates are on sale with Gigantic right now, so grab your ticket with your pieces of eight right now!

Formed by friends with a shared love of the unruly sounds of the past, Black Water County first burst onto the scene in 2017 with debut album Taking Chances. Applying pirate aesthetics to punk rock, embracing Celtic folk, sea shanties and subverting the glamorous tales of historical criminal gangs – they tapped into the traditions of the past to tell their unique stories of present rebellion.

Their idiosyncratic style and raucous sound chimed with listeners across the UK and Europe, playing to packed out audiences wherever they arrived during their first headline tour in 2018. They have since played at such esteemed festivals as WOMAD, Boomtown Fair, Beautiful Days, Camp Bestival, Larmer Tree and Teddy Rocks!

The motley crew were back with a brand-new album in 2020. Titled Comedies and Tragedies, their new record is a tribute to the people they have grown into and the fans that have carried them aloft and taken the band to new shores they could never have imagined visiting.

“Over the past eight years of playing music together, we’ve grown up through angsty teenage years into angstier adulthood, with only our music to reflect our hurdles and triumphs. On the days where the world seemed to be raging on indifferently or responsibilities came banging at our doors, we took solace amongst the singing, sweating people in front of us on a Friday night with that 10ft by 6ft space beneath our feet becoming our sanctuary.”

Black Water County have just announced headline dates to promote their new LP! Do not miss your chance to see this swashbuckling band take to the stage all around the country – tickets are already selling fast so book yours with Gigantic before they’re gone!