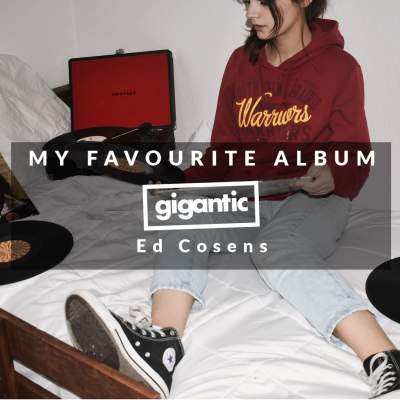 My Favourite Album invites the key figures from the music industry to talk about the records that inspired them, giving a personal insight into how they hear the music. We are very honoured to be joined by songwriter Ed Cosens, renowned as the guitarist/bassist from Reverend and the Makers!

Following a magnificent career with indie icons Reverend and the Makers, which saw the indie icons smash into the Top 20 with all six albums and first record The State Of Things which peaked at No.5 after selling 25,000 copies in its first week; Ed Cosens now embarks on his solo career!

Cosens has already released three remarkable singles, including timeless classic “Madeleine”, quirky and enigmatic song “If” plus gorgeous anthem “The River” – and now has his sights set on his first solo album Fortunes Favour.

Recorded at the Giant Wafer Studios which can be found in the outstanding beauty grounds of Mid-Wales, Fortunes Favour was produced by Cosens and Dave Sanderson, audio engineer and friend from his hometown of Sheffield. He was also aided by non-other than fellow Steel City legends Joe Carnall of Millburn and Adam Crofts of The Crookes.

To celebrate his return, Cosens is releasing a four-part short film ahead of his debut record. Created with Flat Cap Films, each edition brings to life a re-envisioning of the singles as a wonderfully curated dance with the majestic city of Sheffield as the backdrop.

Ed Cosens releases his eagerly awaited debut album Fortunes Favour via Distiller Records on April 9th, and fans will be eager to pre-order their copy HERE.

WHEN WAS IT RELEASED?

WHERE DID YOU FIRST HEAR IT?

I first heard, or rather I should say, saw this record whilst traveling in a splitter van around northern Europe somewhere! It was during an early Reverend and the Makers tour in Europe circa 2007/8. Traveling in a van with a DVD player was exciting enough let alone watching and listening to something this good whilst on the move!

WHAT DOES IT MEAN TO YOU?

I’d been aware of Talking Heads and their music for a while before this and was of course a big fan, however I don’t think it was until I watched the Stop Making Sense film that I fully appreciated how brilliant and ground-breaking they were. Watching and hearing the album for the first time was one of those rare moments where having experienced it, your view and outlook on music is never the same again. Having been lucky enough to watch David Byrne’s recent American Utopia tour live, I got a glimpse of how this record might have felt to experience live and the fact that he is still so ground-breaking to this day only cements my love for this record and what it represents to me; a real change in how I thought about music and how it is presented.

TALK US THROUGH SOME OF YOUR FAVOURITE SONGS ON THE ALBUM

Well, where better to start than the very beginning! The version of “Psycho Killer” that David Byrne performs on this record is just so clever and different. It immediately signals that this record is something different and tears apart the rule book for how to deliver your material in a live setting. The arrangement of David on his own with the Ghetto Blaster drum machine and just an acoustic guitar combined with the totally bare stage around him is brilliant and of course the way the show then evolves from this moment is nothing short of genius.

Another favourite of mine is the version of “Burning Down The House”. By this point in the concert the whole team are in place on stage and the musicianship and performance are just incredible. Everything from the actual playing to the sounds they’re creating, again in combination with the staging and performance are just so good. The intensity is amazing and some of the percussion work and the rhythm they create is amazing. Shout out to one of my favourite bass players of all time Tina Weymouth, an absolute legend.

ANYTHING ELSE YOU WANT TO ADD?

Not really apart from the obvious instruction that you must consume this record visually as well as audibly! Get it on the biggest screen you can, with the best sound system available, at the loudest volume you can (safely) get away with and just allow your mind to be blown! Cheers, Ed. X