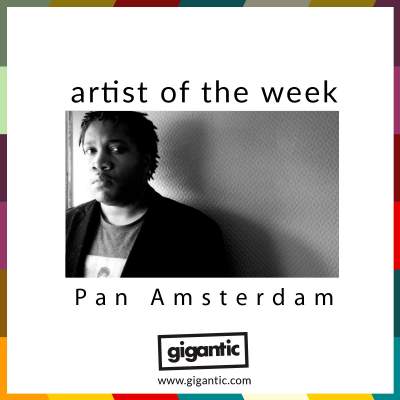 It takes talent and tenacity to rise to the top of your field; but true greatness is revealed when an artist also excels in other areas. Renowned jazz musician Leron Thomas has re-invented himself as enigmatic and idiosyncratic hip hop star Pan Amsterdam. His newfound rap persona has opened him up to entirely unexploded musical avenues for this living legend, leading to writing and producing for nonother than the great Iggy Pop!

Striking out as a solo artist in a totally new direction, famed jazz trumpeter Leron Thomas adopted the new name Pan Amsterdam and began walking his own path, creating a unique LoFi take on hip hop as first heard in 2018 on debut album The Pocket Watch.

Following the release, he teamed up with DJ/ producer Mr. Shn and toured the U.K. before returning to the U.S. for further shows with Open Mike Eagle. During those dates, he would meet up with proto punk and original rock n’ roll wild child Iggy Pop, who invited him to take charge in writing his latest LP Free.

In 2020, Pan Amsterdam unveiled second album HA Chu. Considered to be his most intimate work yet; the new album continues Thomas’s development of an exceptional sound which glistens with glacial perfection.

Pan Amsterdam rounded up the year with the release of remix of HA Chu track “Kun G Chicken” by Leamington Spa based multi-instrumentalist Bastien Keb. Taking the unique approach of completely deconstructing the song and building it back together using original performances rather than samples, handcrafting an elegant re-interpretation of the song.

“This involved a Singing Saw, Cello, Clarinet, Keys, Percussion, Bass, Trumpet and Flute. Because that's what Bastien Keb does. He has turned the track into a smoky basement Jazz club number. Bogart-type.” – Pan Amsterdam

Leron Thomas has his flights booked, ready for his U.K. Pan Amsterdam tour which kicks off later this year. See his headline shows at some of Britain’s best independent venues when you order your tickets with Gigantic.