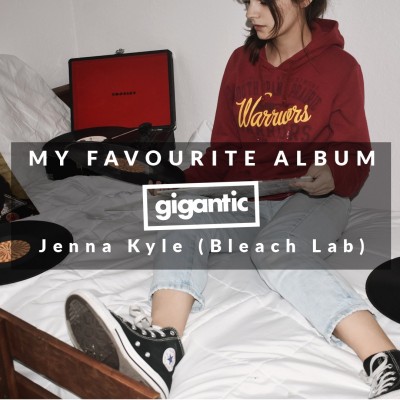 Gigantic talks to top bands and artists and asks them about the records which truly mean something to them. This week, we are joined for My Favourite Album by Jenna Kyle, lead singer of Bleach Lab.

Born during the latter end of 2018, Buckinghamshire-formed indie quartet Beach Lab exhibit the sort of raw emotional honesty which instantly attracts a loyal following. Led by Jenna Kyle, the fourpiece combine her deeply personal lyrics with dream pop and a shoegaze inspired sound which emphasises the poignant words with reverberating riffs and echoing melodies.

Named by such tastemakers as Gigwise and Under The Radar as THE breakthrough band of 2021, they have just dropped their powerful five track EP A Calm Sense Of Surrounding which has been picked up by Steve Lamacq, Shaun Keaveny and Tom Robinson who have all played Bleach Lab on their BBC 6music shows.

Bleach Lab will appear at exciting new Manchester night Mood Swings featuring premiere post punk at YES Basement. They play alongside Yard Act, Nuha Ruby Ra and Ralph TV on Saturday 31st of July. They are also added to the mighty line up for Get Together – the brand-new festival arriving at Foundry in Sheffield on Saturday 7th and Sunday 8th of August!

My all-time favourite album is Ex:Re from Elena Tonra’s solo project away from Daugher, Ex:Re.

Frank (our guitarist) actually told me about it just after it was released. I had always been in love with Daughter and had no idea she was releasing a solo album. I listened to it on the train back from practice in London and let me tell you it has been my go to train journey album ever since.

It’s my comfort album, but at the same time it has so much to unwrap. It’s beautiful to listen to but if you sit and take in everything she is saying it is clear that you are listening to her deepest darkest thoughts. I have taken an awful lot of inspiration from this album lyrically and I would say it has shaped a lot of the ways I write. The lyrics are written in such a way that you feel you are listening to a conversation or even reading her diary. She creates such visual images with her words and it’s so easy to slip into the words.

I would say my favourite song on the album is “Crushing”. To me it speaks about empty connections and a lack of meaningful human interaction. One sided relationships. Like the chorus says “I guess attention spans are lessening, it’s a lesson in humans using machines to show their feelings”. Using our phones and technology to communicate rather than expressing ourselves face to face. Losing our abilities to communicate the way humans used to.

My second favourite song of this album is “Romance”. It has a very harrowing and extremely raw story to tell. It is very much about sexual harassment, assault and just general acts that people, not always but often women, experience day-to-day. “I was uncomfortable, I was hurt. Still with blue innocence in his eyes, I felt my reasoning was harsh.” Feeling guilt and blaming yourself for someone else’s actions. “In the grand scheme of everything he’s probably called a nice man, or an ordinary kind of man”.

Be prepared to learn some things about yourself, as well as those around you when you listen to this album!