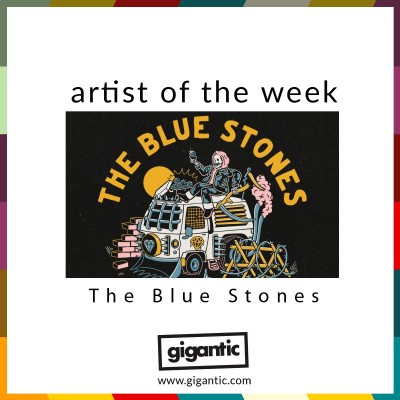 Now the boys are back with brand new album Hidden Gems which sees them discover an entirely new side to themselves and returning with a record which may surprise their existing fans and sure to attract many more listeners.

"Even though some of these songs sound different, at the end of the day we stayed true to who we are as The Blue Stones. So even if the songs border on a different genre, you’re still going to get us, because it’s still us writing the songs and performing the songs. We have a vision that we’ve been focused on since we started this band and that hasn’t changed. I want the fans to really enjoy and connect with these songs” – Tarek Jafar

Ontario high school friends Tarek Jafar (vocals/guitar) and Justin Tessier (drums/vocals) formed blue rock pairing The Blue Stones in 2011. They released a self-titled EP the same year and were pleased to draw comparisons to their inspirations, with listeners drawing comparisons to the huge rock riffs of Led Zeppelin, the blues feel of Muddy Waters and the psychedelic experimental guitar sound of Jimi Hendrix. They brought out second EP How’s That Sound? the following year before setting their sights on a full-length record.

Touring and playing support for the likes of Fitz and the Tantrums, The Stone Foxes and Justin Nozuka helped expand their scope and in 2015 they first released debut album Black Holes. Their songs would be picked up by EPSN Monday Night Football which massively raised their profile and saw them sign to major label Entertainment One who would re-release Black Holes in 2015, now reaching a much bigger audience.

Whereas a lesser band would have been trapped with such early success, happy to stick to the sound everyone would expect; The Blue Stones were eager to keep evolving and push their music as far as it can go. Recruiting Paul Meany from New Orlean indie rock band Mutemath shortly after producing Twenty One Pilots best-selling fifth album Trench, they set about creating a record which would shake up the band and fans alike.

Hidden Gems was first unveiled to the world with lead single Shakin’ Off the Rust which shot straight to Number 1 in the Canadian rock charts. It was then followed by an impressive series of singles, including Grim, Careless and Let It Ride before the album dropped in March. It also includes latest single Spirit, which perfectly sums up the ethos of the new album.

"I've always felt a little torn between two selves. The person who does what he should, and the other who does what he wants. It's ping pong for the psyche, and I've played it extensively this past year. I'd like to consider myself a normal, contributing member to society; and that's only true because I let myself indulge in the 'wants' every now and then. That's what letting your spirit play is.” – Tarek Jafar

The Blue Stones will be back in the U.K. next year and have announced a Spring tour in support of their scorching second album Hidden Gems. Playing headline dates in March, the tickets are released later this week so set an event reminder with Gigantic and get ready to enjoy their awesome live shows.

The Blue Stones tickets are currently on sale.