The Stone Foxes are San Francisco's rock band. They bear the torch of their predecessors with the knowledge that rock 'n roll can move a new generation. They’ve played in front of thousands at festivals like Outside Lands and Voodoo Fest, they’ve headlined the legendary Fillmore Theater in their hometown and they have supported acts like The Black Keys, Cage the Elephant and ZZ Top. Now, with the release of their fourth album, Twelve Spells, they have solidified a place in their City's rich rock 'n roll history.

The Blue Stones played support for The Stone Foxes 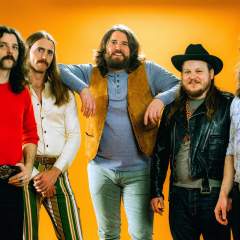 That's all we have for The Stone Foxes! Check out their upcoming shows